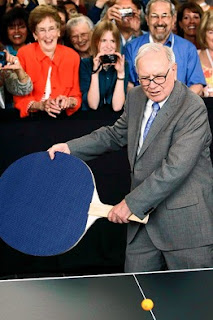 Mr. Buffett also defended Moody's, which owns one of the ratings firm that critics say amplified the crisis by giving triple-A ratings to assets that ultimately collapsed.


Ratings outfits such as Moody's Investors Service and Standard & Poor's, a unit of McGraw-Hill Cos. have "incredibly wonderful businesses," he said, adding that their "pricing power is significant."

Late yesterday, Moody's filed their annual report, and in it, they disclosed that they received a Wells notice from the SEC:

When Goldman Sachs got their Wells notice, the blamed it all on just one person--the fabulous Fab.

Buffett, of course defended Goldman. When Moody's got their Wells notice:


On March 18, 2010, MIS received a “Wells Notice” from the Staff of the SEC stating that the Staff is considering recommending that the Commission institute administrative and cease-and-desist proceedings against MIS in connection with MIS’s initial June 2007 application on SEC Form NRSRO to register as a nationally recognized statistical rating organization under the Credit Rating Agency Reform Act of 2006.

they of course, blamed it all on just one single violation--just like Goldman did--the rogue employee of the "fat finger" of the market!

WSJ
According to Moody's filing, the SEC staff has informed Moody's that its description of its procedures and principles in its 2007 application "were rendered false and misleading… in light of the company's finding that a rating committee policy had been violated."

"We have responded to all the requests on the matter by the SEC staff and will continue to do so," a spokesman for Moody's said. "Moody's policy clearly prohibits the conduct in which these employees engaged, and we do not believe a single violation of the policy renders that policy false," he added.

Buffett, of course, will tell you otherwise,. The folks at Moody's, who rated securities AAA that were toxic--well, that's just as Buffett said, "an incedibly wonderful business."

It's such an incredibly wonderful business that the SEC wants to take them out of it! 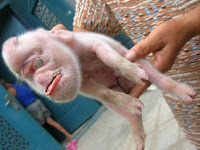 Remember th epig, that was norn with th eface of a monkey?

Maybe Warren's genetic defect, of defending those who raped and pillaged the taxpayer, only shows up in his twilight years.

After his folksy charm, wore off!
Posted by Palmoni at 5:16 PM