Gisele Bunchden and the euro 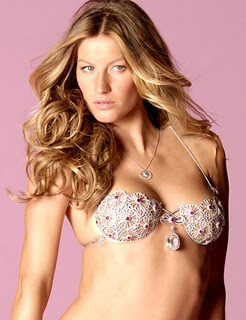 In the meantime, I'm going to hire Gisele Bündchen as my head currency trader.She is the super model who demanded to be paid in Euros when it hit $1.60. I'll simply take her advice and run like hell to do the opposite in the market. And who knows? She may have some free time after work.

1.60???
And CNBC's resident milf, Trish Regan had the same thing to say also. She always likes to pretend she is full of gravitas--after all, she had a cutting edge report on Portugul today, therefore she must be an expert on Gisele and the euro. She mentioned Gisele after the report on oil today, but CNBC didn't keep her words of wisdom on video. She was then wearing the white shirt over her yellow dress.
Gisele signed her contract with L'Oreal in August of 2007, and then, demanded payment in euros. It was only picked up by Bloomberg in November of 2007, and then, it only became part of financial lore, in October of 2008, 14 months later.

Nov. 5 (Bloomberg) -- Gisele Bundchen wants to remain the world's richest model and is insisting that she be paid in almost any currency but the U.S. dollar.

When Bundchen, 27, signed a contract in August to represent Pantene hair products for Cincinnati-based Procter & Gamble Co., she demanded payment in euros, according to Veja, Brazil's biggest weekly magazine. She'll also get euros for the deal she reached last October with Dolce & Gabbana SpA in Milan to promote the Italian designer's new fragrance, The One, Veja reported. Bundchen earned $33 million in the year through June, Forbes reported in July.

And back then, Wall Street said the euro would dump, since Gisele was the magazine cover indicator. In fact, it took another year, for the euro to top out! 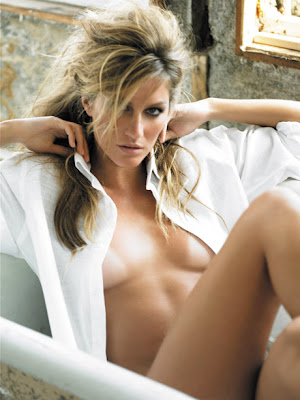 And she wears a white shirt way better than Trish!
Posted by Palmoni at 9:07 PM