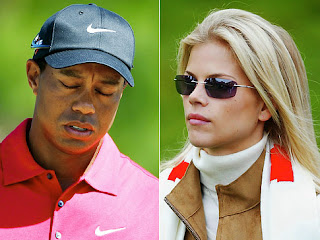 Wronged wife Elin Nordegren is trying to club an eye-popping $750 million out of Tiger Woods in their divorce negotiations, according to reports Friday.

Woods hasn't agreed yet, but if he does he wants total silence from his soon-to-be ex about the collapse of their marriage - forever, according to the Chicago Sun-Times.

Nordegren has so far said no to signing a lifetime "confidentiality clause" that would prevent her from writing a book or doing any interviews about the split.

She reportedly also wants full custody of their two kids even though it was first thought the couple were going to agree to joint custody.

Sources said the divorce negotiations "have turned extremely testy" and the couple no longer talk to each other.

Now its a meltdown!
Posted by Palmoni at 8:26 AM

I haven't laughed that hard for a long time Manna. Thanks!