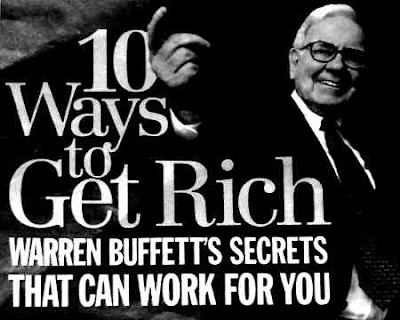 After loquaciously defending Goldman Sachs and Lloyd Blankfein, and then, after telling us that Moody's had a wonderful business model, we now find out that Moody's never disclosed their Wells notice, and paradoxically and coincidentally, the big sellers of Moody's stock after the Wells notice arrived were Moody's CEO Raymond Daniel and Warren Buffett:

NYT
According to regulatory filings, Raymond W. McDaniel Jr., Moody’s chief executive, sold or exercised options worth about $4.3 million on March 18, the same day that his company received the Wells notice.
Moody’s shares closed at $29.66 the day of Mr. McDaniel’s sale, near their high of $30.54 so far this year. Moody’s shares have traded as low as $18.50 over the last 52 weeks. On Monday, the shares fell as much as 12 percent, but finished the day down 7 percent at $21.77.

Moody’s said Mr. McDaniel’s sales in March were part of a prearranged plan established about a month before the Wells notice arrived.

Berkshire Hathaway, the investment vehicle for Warren E. Buffett and a major Moody’s shareholder, also sold more than one million shares worth more than $30 million on March 19, March 24 and March 26. The sales represent a small portion of Berkshire’s overall stake in Moody’s. Berkshire did not return a call seeking comment about its sales. A spokesman for the S.E.C. would not comment on Moody’s disclosure.
Posted by Palmoni at 8:44 AM

So printing up a trillion dollars wasn't enough. Don't you think the economy is dipping back into recession by the market's actions? I mean it predicted the first recession and rebounded before the recovery occurred. Interesting that gold is making new highs! Who would have thought that barbaric relic had any value :P

Isn't that the truth? Here's how I see the economy.

Take a look at this picture of Jessica Alba

You should see the crack but you can't.

That's like the economy. The cracks are there but you can't see them yet

your Colombia company had a nice move back

i wish i had some funds to buy the columbian co last week...i'm tapped out on my accts and my daughters acct is in sharebuilder which doesn't allow us to buy those OTC stuff

Palmoni, any thoughts on gold at this level. I have HL...what are your thoughts?

AUY bought property right adjacent to one of their mining concessions.

And I don't think AUY even has the drill data! But it was one heck of a purchase.

But look at AUY today. That stock is breaking out. I think you'll see that there is millions of ounces there (at least that's what the historical data shows)

Now if the historical data was good enough for AUY to use, well doesn't that mean the data is also good for them?

We'll see. I just think there are some jokers in the stock that are clueless.

I know you don't want to give updates on that Colombian co. until you go visit the company, but can you shed some light on the Anori project joint venture? It seems the holding co is contributing more land to the shell co with some junior partners. The initial test samples look ridiculous then again these guys scooped up some desirable land when no one dared to step foot in the country, hah!

how will Gold Correlate with the market?

Gold and silver can't be held down now that JPM is being investigated for holding down the price of gold and silver with their manipulation lawsuit.

That's what I see. Now we'll hear it is because no-one trusts the dollar, the IMF bailout of Europe isn't real, etc.

But what happened to that so called magic tax on miners in Australia? Nobody cares one iota about that!

And rightly so. At least in gold, the tinfoil hat crew are a lot closer to the truth!

After all, some call said that by espousing that angle I was losuing my credibility. Oh big deal. Like I really care. Give me a break. If they all really have th egold that the banks say people have, why do we just get a trust me?

And why is the only account (Sprott physical gold trust) selling at such a premium? Why does the market say that if you have real physical gold, it is worth so much more than the "paper gold" that the money center banks are selling?

And I have news for you. Why are the money center banks sniffing around all the gold areas, trying to throw money around to get production from the ground?

Maybe because the miners don't even trust the banks to sell some gold forward?

SQUEEZE those pricks who made life miserable for the long suffering gold and silver holders!!

What's the stock at? PHYS

So then, is the market wrong, or have the bullion banks suppressed the prices?

You make the call!!!

AUY purchase of land was right next to Anori

I'll let you read between the lines!!

that the bailout wouldn't work

do you know what is keeping APWR down?

Could not find much information on APWR and wonder if it is worth to hold out?

what do you think of the high fliers?

are you buying NYT or other media stocks?

Give em another day on the upside to come close to their previous tops and then sell the piss out of 'em!!!

Cramer thinks the high fliers are now giving you the all clear on the market.

What more do you need than a sell indicator like that?

He'll pimp them on his show, but mutual funds can't get out in one day. They'll use the strength to lighten up.

Oh boy, I have to go--the chief cop Mary Shapiro is on CNBS. What a douchebag that knows nothing!!

what high fliers are you referring to?

CMG, ISRG, SHLD, BIDU, WYNN, DECK, CRM, NFLX just as an example the overowned stocks--let them come up to their previous highs and then sell the piss out of them