Now that was worthwhile action!! Whoa Nellie!!! Panic by the machines!!! They took out every stop, and then they tried covering what they sold--all on the supposed fat finger!!!

But Wall Street will just tell you they were derisking! 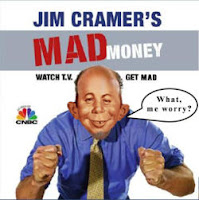 And now Cramer, will preach prudence. Heck in 2008 he panicked the masses. Maybe he'll be able to do it again!!

But really--Come on--today was just like any other day with these dark pool high frequency traders--except today--we saw them, in all their glory!!!

At 888 down, I blew out all my puts--and with the spreads--it was work!! Two minutes later we were down another hundo!!! Booyahhh!!!!

So what does this means? It means we really never had that many natural buyers, and the machines were just kiting stocks from one hand to another.

(But Wall Street has your back. If stocks moved more than 60% up or down, between 2:40 and 3:00, Nasdaq said they will cancel those trades. Now isn't that special??)

And it means, that enough people are on edge that you should get some more wild action tomorrow. But look what happens when Uncle Sam doesn't have Wall Street's back!! Let's see how these folks trade when they don't have any inside information!!

And quite frankly, all these folks whining about chaos out there--Big frickin deal. The love affair of their life, the stock exchange, once again, was proven to be just another mistress, pimping herself to whoever had or needed the most money!!

So what happens now? Just look at the fat finger prices today. Everyone will tell you that those are fantasy prices. Says who? Maybe in ACN or PG they were! 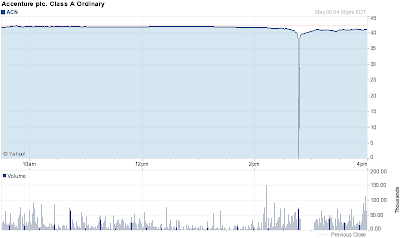 How was that ACN? One cent??? Did someone from Citigroup sell billions in this number by mistake too? Who is kidding who? 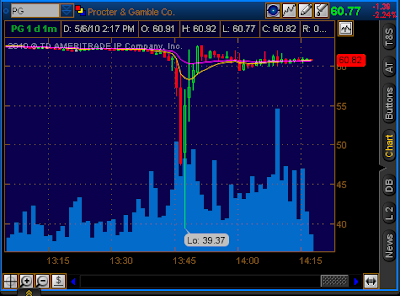 Denninger had charts on PG--on when it broke to fantasy prices, and then the Dow. 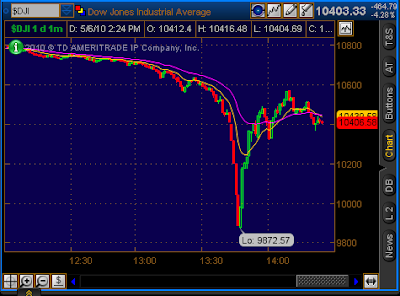 Wait--Maybe Mary Shapiro fropm the SEC will do something about that? Does anybody want that bet???

The market broke down, because stocks were over-priced, and over-owned, and over-kited.  And now, the folks who were thinking about getting in, won't even think about that again. They'll say the whole game is rigged! 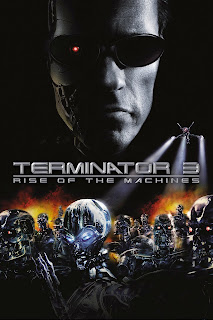 But Wall Street wants you to believe it was just a "fat finger." It wasn't that. It was just the machines going out of control!

Well, the game was rigged. But before, Wall Street was in on it. Now they have to eat their young, because no-one trusts anyone again.

All because of a couple riots in Greece? Because no-one knows their exposure??

Or is it more than that?

Let's hope the machines think it is more than that.

So we can take some more money from them!
Posted by Palmoni at 7:45 PM

Yeah the market is a casino but at least Gold is being honest!