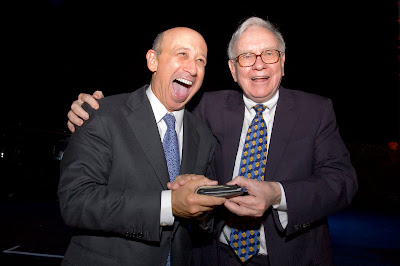 Blankfein went on Charlie Rose last night defending his company, but his biggest endorsement came from Warren Buffett this morning, who said he supported Lloyd 100%.

But look at Lloyd with Buffett's billions. He can't even hide his glee!

“There were some e-mails where some people were projecting I would say, at best indifference, and at worst a callousness,” Blankfein, 55, said in an interview on the “Charlie Rose” television show last night, according to a transcript. While he said those e-mails aren’t representative of the firm, “it’s inexcusable if 10 people think that way or thought that way.” 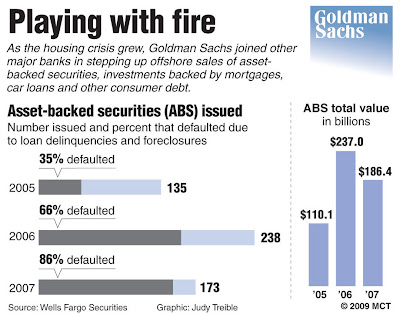 So now its just emails? It isn't about the money? About Goldman offloading their crap to their clients?

Its just some rogue emailers!

How about Josh Birnbaum, who couldn't recollect anything about Paulson and Abacus at the Goldman hearing, except to remember that he wasn't a significant player.

Don't his emails show this:

"He's definitely the man in this space, up 2-3 bil on this trade," said an email from Joshua Birnbaum, a top Goldman Sachs trader, in July 2007, about three months after the bank struck the deal now under SEC scrutiny. "We were giving him a run for his money for a while but now are definitely #2," suggesting Paulson & Co.'s success on the trade was exceeding Goldman's

Now he's the man! And Goldman was piggybacking him!

But Lloyd said, "The firm is guiltless."

Get on Charlie Rose because the stock is dropping!

But the executives from Goldman, told us last year, in their previous TARP hearings, that they weren't at all concerned when Goldman's stock was under 60, because they had great confidence in the firm.

And then, only after the stock had rallied to 82, did Charle Gasbags report on that story.

Goldman ostensibly bailed them out, because they didn't want Wall Street to see insider sales of Goldman stock--only because of "perception" issues. 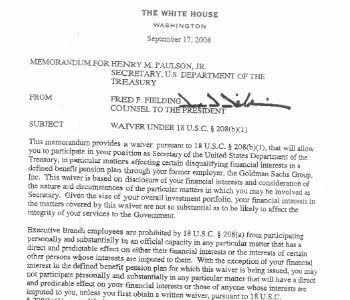 So are we really supposed to believe that Goldman executives weren't concerned when they stock was at $50? Like they told the world? Heck, Secretary Paulson even had to get a secret waiver to work with Goldman because he was so frightened!

So why now is Lloyd now pimping himself on television?

Since Goldman had to issue 60% of their 2009 bonus in stock for their employees, instead of cash, Goldman decided to game the price. Back in early February. At $154.16.

In fact, the Goldman partners were even crowing about being paid in stock.

"It's made me rethink everything," a Goldman Sachs employee said last night. She was sipping champagne. "I like the new structure even better. My monthly take home just went way up."

So now that these folks are underwater by $9 on their Goldman stock, for their 2009 bonus, Lloyd goes on Charlie Rose. 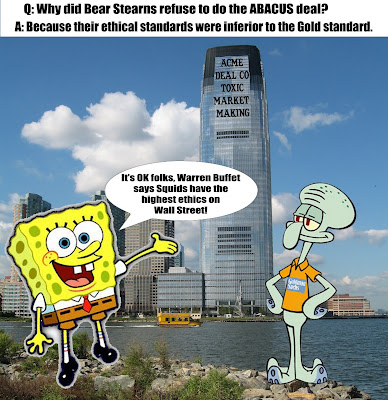 And then gets the endorsement from "the man" himself, Warren Buffett!

Even though the Goldman bonus babies probably already synthetically locked in a price, while they talk bravely to the world!

While sipping champagne!
Posted by Palmoni at 9:06 AM

What a shock, Buffy talking up one of his investments.

Now there is a independant review of GS, NOT.

Any idea on who made the "bilsky" in the same Birnbaum e-mail chain. Damn redacations!!