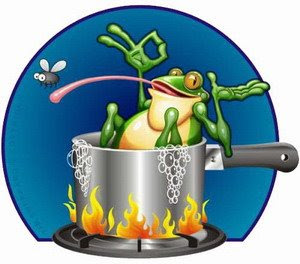 The plan may reward investors with 20 percent annual returns on “really toxic” mortgages bought at 45 cents on the dollar by allowing them to borrow six times their money with “non-recourse” government-backed debt, New York-based Credit Suisse Group AG analysts Carl Lantz and Dominic Konstam wrote in a March 27 report. That loan would be worth 15 cents to an investor seeking the same return who can’t use borrowed money.
http://www.bloomberg.com/apps/news?pid=20601087&sid=aKm0M7RHXDoQ

The TALF plan, is supposedly theft to the taxpayer.

It just appears to be now. The subsidy done "under cover!"
http://aaronandmoses.blogspot.com/2009/03/do-you-have-cover.html

But what is happening to prices on stocks and mortgages? They are going up!

So deal with it.

Higher prices will let the public put their pitchforks away, and the only group that needs a fork stuck in their hide is the bears!

They are like the exothermic frog, boiled in water.

They're already cooked and done unless they unwind their positions.

But unlike the frog, the bears are now starting to feel the heat!
Posted by Palmoni at 7:52 AM