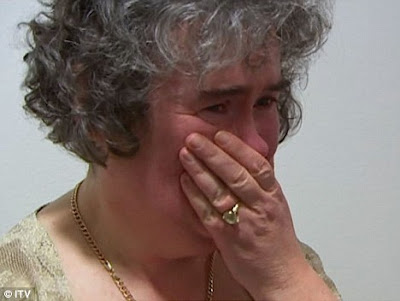 Before this article in the Daily Mail, there was a whole lot of buzz that this singing sensation was a plant on "Britain's Got Talent" TV show used to get ratings.

Doesn't that remind you of the bears and their massive conspiracy stories about the 666 bull market that no one believes in?

Now Ms. Boyle's story has been proven real, just like this bull market. The only difference is that the geniuses on Wall Street have a much harder time recognizing reality!

Her song is here, and it's already been viewed over 25 million times.
http://www.youtube.com/watch?v=9lp0IWv8QZY

Her story on the Today show.

And her story is here:

Despite the common perception that she sprang from nowhere, Susan Boyle is not entirely unused to fame.

She was well known in the village where she has lived all her life as the slightly batty spinster who lived alone with her cat, Pebbles.

Every village has one, and 48-year-old Susan Boyle, who was born with minor brain damage and has learning difficulties, obligingly played the role to which she had been cast.

She adopted eccentric habits such as keeping money in an empty whisky bottle and cheerfully allowed herself to be teased by the local children on the rare occasions she ventured out of her pebbledash-fronted terrace house.

It all began last Saturday when her rendition of I Dreamed A Dream, from the musical Les Miserables, was screened on the launch of the third series of ITV's Britain's Got Talent.

She stepped out onto the stage in a brown lace dress that bore the unmistakable stamp of 'local boutique', set off by thin black tights and tan shoes.

She announced she wanted to become the next Elaine Paige and did a hip wiggle that was mildly disturbing. The audience and judges leaned back in their chairs and prepared to be entertained, for all the wrong reasons.

By the end of the song, they were all on their feet and one of the judges, Amanda Holden, had tears in her eyes.

It was the start of the Susan Boyle phenomenon. So far, assorted clips of Boyle's performance have been watched more than 20 million times on YouTube.

Judge Simon Cowell is said to be lining up a record deal for her with his Sony BMG label (she says she can't talk about it, but is not denying it).

And America, a market even British A-list pop stars struggle to break, has gone crazy for her. Oprah Winfrey wants her on her show. Cowell is predicting a number one album over there.

Yesterday she was booked to appear on Larry King Live on CNN and NBC's Entertainment Tonight.

On Thursday, Susan sang an a capella version of I Dreamed A Dream on CBS's Early Show via satellite.

Offering technical praise and advice at the end of a phone was world famous musical singer Patti LuPone, who created the role of Fantine, who sings I Dreamed A Dream in the original show of Les Miserables.

The ones who were mean to me are now nice to me,' Susan revealed during her interview with CBS, a reference, surely, to those people who have teased and tormented her over the years...

Or to put it another way: you shouldn't judge a book by its cover.

The lady who started all this off has spent most of the week at her home in Blackburn, near Bathgate, West Lothian, with Pebbles the cat, trying to make sense of it all. (Interspersed by a series of television interviews, naturally.)

'It has been an incredible week but I'm just taking baby steps, seeing where it goes,' she says.

'Singing on CBS was amazing and being given advice and encouragement by Patti LuPone was out of this world. She's a brilliant singer.'

How is she feeling at the moment, as the world goes crazy about Susan Boyle? And does she have an explanation for what has happened?

'I've been very calm and relaxed,' says Susan. 'I'm taking it in my stride. I have no explanation for it, none at all.'

Has she been living it up this week? 'No, I'm just carrying on as normal. Tonight I'm staying in and having fish and chips.'

Susan, a devout Catholic, has lived in Blackburn all her life, and is the youngest of nine siblings (five girls and four boys)...

Recalling her childhood, she said earlier this week: 'I was born with a disability and that made me a target for bullies.

'I was called names because of my fuzzy hair and because I struggled in class. I told the teachers but, because it was more verbal than physical, I could never prove anything.

'But words often hurt more than cuts and bruises and the scars are still there.'

Yet, bullied though she was, there wasn't anyone in Blackburn who could deny that Susan had an amazing voice.

She was a musical child and, at the age of 12, her mother placed her in the choir of her local Catholic church. 'I also sang in musicals at school, lots of them, I can't remember what.'

After leaving school, she became a regular on the microphone at the Happy Valley Hotel in Blackburn and performed karaoke at local pubs.

When she was 18, she took her one and only job as a trainee cook in the kitchens of West Lothian College.

'It was a six-month contract and then it stopped,' she says, suggesting that she is not as talented at cookery as she is at singing.

Ever since then, she has done voluntary work, on and off, helping the elderly, supported by her parents. She did not move out of the family home, and she did not go out on dates.

In an interview last weekend, she talked about the lack of romance in her life, and regret at not having children.

'I've never been kissed,' she said. 'If someone even pecked me on the cheek it would be nice, but I've never even got that close

'My parents didn't want me to have boyfriends, so I've never been on a date. I suppose I've accepted it's never going to happen.'

But today, Susan, perhaps mortified that throwaway remarks about the lack of romance in her life are being quoted around the world, is in a more reticent mood.

Does she want to talk about men, I ask her? 'No comment. It's not relevant to Britain's Got Talent. I prefer to keep myself to myself,' is all she will say. 'I'm a lady. Let's just leave it at that.'

Until last Saturday Susan had led a quiet life....

The following day, Susan went to church for the Easter Sunday service. She received a standing ovation when she walked inside.

'Although we sing in church, not a lot of them knew how well I could sing, so it was a bit of a shock to them. I'm a bit shy and retiring, so they would never have known.

'Everyone has been very nice and it's lovely when all the kids stop me in the street to congratulate me.'

But Susan hasn't quite been able to escape the teasing that has followed her throughout her life.

Her rather wild hairdo and bushy eyebrows have led her to be dubbed the 'hairy angel' in some quarters.

But she's used to it, and right now she really doesn't care. 'It's like water off a duck's back,' she says. Susan is already the favourite to win Britain's Got Talent. The winner of the show will receive £100,000 and the opportunity to perform at the Royal Variety Performance later this year.

She says it would be her dream because the Queen is her heroine. 'She is beautiful and regal and has the ability to lead. She is a very dignified lady.'

Her life has changed irrevocably of course. Susie Simple was the last person on earth that those who know her would have expected to become a global superstar.

And that, perhaps, explains in part the madness of this past week.

All of us can dream our dream, and get out there and live it, if we just have the courage.
http://www.dailymail.co.uk/tvshowbiz/article-1171536/They-called-Susie-Simple-singing-superstar-Susan-Boyle-laughing-now.html