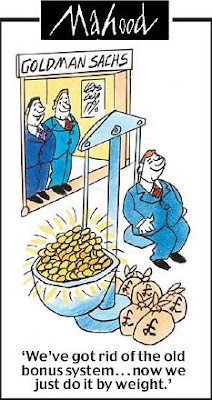 Q: What did Goldman do in FICC for the quarter?

A: Net revenues in FICC were $6.56 billion, more than double the amount in the first quarter of 2008, and this quarter also included $800 million of writedowns. Without the writedown Goldman was up to $7.37 billion in FICC, after writing down over $2.6 billion in FICC in December alone.

Q: What was Goldman's best quarter ever in FICC as a public company?

A: Q3 in 2007, when FICC did $4.9 billion. Thus, in the world's toughest environment, Goldman made billions more this quarter, than at anytime in it's history. We however, want the street to believe it was our trading prowess, and not the largess from the taxpayer via AIG that helped our numbers.

Q: How did FICC do in the missing month of December?

FICC (Fixed Income, Commodities & Currencies) is where Goldman's clarity, is in fact, the Government's charity!

Any story, other than that, quite simply is Goldman Sachs prevaricating.
Posted by Palmoni at 12:01 AM

Ephedra Diets with Ephedrine Alkaloids are scientifically proven to burn fat, suppress appetite and energize. Beware of fake ephedra extracts sold elsewhere without the active ingredient ephedrine alkaloids from years ago. What overweight women and men have learned is that for years virtually every professional bodybuilder, informed fitness expert and successful personal trainer would tell you the same thing. Whether you want to accelerate the burning of excess body fat, boost your metabolic rate, heighten your thermogenic output or increase your energy level, there is nothing stronger or more effective than the "thermogenic cocktail" of Ephedra, Caffeine, and Aspirin (The E/C/A- Stack"). Patented formula and scientifically proven to work without diet or exercise.

Get the RedCutz ECA Stack at: