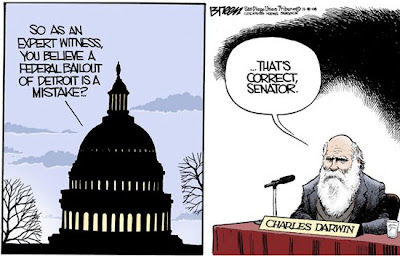 Now that "wasn't" supposed to happen, wasn't it? At least that's what the bears told us! Some companies don't need Uncle Sam's help, thank you very much!
And didn't they tell us that the market was ready to go down with their tricks on Monday and Wednesday where they tried to manipulate the market?
Yesterday, I was speaking to a deflatinonista hedge fund manager, that I hammer with bullishness at least once a week. Last Saturday, he told me I was crazy, and that the market was heading to a 5 handle on the S&P and the Dow. Yesterday, he changed his tune.
It was about 3:30, and right before the market started to rally, and then he said that maybe "the lunatics" in the market could move the market to 11,000 by the end of summer, but he was waiting for the S&P to get under 800 first.
I said, "Under 800?? You have no chance at all for that to happen. You need to move now! This is it--we are starting the next leg up!"
Now think about this--He is one of the brightest folks I know in the business, and he has every bearish argument and statistic in his viewpoint arsenal.
But he changed his market viewpoint on the Dow by 100%, in the last week! From 5500 to 11,000! That is what happens to someone who is short the market, and under-invested.
Now think of those bears, who dispense advice whose franchise relies on their "bearishness." Unlike traders, or investors, they aren't graded by the market.
At least not yet!
But Mr. Market is coming!
And then, these bears, will finally be gone!
http://aaronandmoses.blogspot.com/2009/04/legs-are-following-off-bears-stool.html
But these prognosticators will be the last to know!
So listen to them, at your own peril. After all, didn't Roubini tell us that "Ford was running out of cash, and heading to bankruptcy?"
Roubini and the bears will soon find out, that the survival of the fittest doesn't happen over millions of years. Evolution is quick!
After all, his Ford prediction of five months ago is now toast!
And this Darwinian market will get the professor, and show that the bears belief's are as right as the flat earth theory!
Posted by Palmoni at 7:34 AM