The Swine Flu and Obama 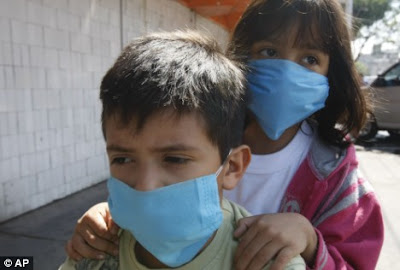 Don't think these won't be the next play on Wall Street. (There are some small Chinese medical companies that will probably scream on this news. And the only ones that may breathe easier on this news if it spreads, are the bears. Economic panic estimates are here: ) http://www.businessinsider.com/swine-flu-pandemic-would-cost-trillions-2009-4

The World Health Organization didn't raise it to a pandemic level, which means it probably has spread more than they think--after all, our President met one of it's victims!

Earlier, panic spread throughout Mexico, where those who died were reported to be the first victims of a pandemic with the potential to kill millions.

The same virus type has appeared in Texas, California, Kansas and New York. A total of 19 people have been infected, eight of whom have recovered.

Last night it was reported that President Obama had met one of the possible victims earlier this month.

He was greeted on his visit to Mexico City on April 16 by archaeologist Felipe Solis, who died the following day from flu-like symptoms.
http://www.dailymail.co.uk/news/worldnews/article-1173263/Killer-pig-flu-threat-UK-Fears-grow-worldwide-pandemic-81-die-outbreak.html