The bears maul the market 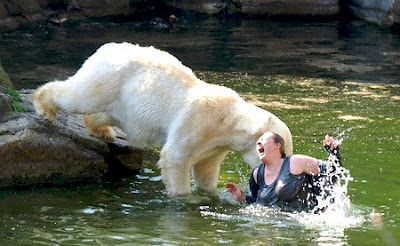 What a mauling! The bears aren't so cuddly after all!

You had the fake bank stress test released by a white supremacist, and then Treasury coming out and denying the report.

You had buyers who were put stock on expiration who puked them up.

Oil got smacked, so did grains, gold rallied and the financials visited Heinlein's crater!

The deflationistas were out in force today!

You can't sugar coat this move down. The bears pressed and shorted, and they piled on the bulls. If it was an orchestrated move, it was done well.

The "message" of the market today was so obvious that this move seemed to have more than a few of the biggest hands helping the move along. But stocks correct, when they are extended, and we need to consolidate lower, to get the next leg up.

So we need to let things come in, and at least try and base a bit, churn, and consolidate at lower levels, until hope gets some help from the fundamentals!

IBM tells you that tech is also extended. Their earnings were fine, but where was the cash flow? Apple Computer reports this week, and in this atmosphere, I'm sure that number will get sold also.

So we need a time correction, and a price correction to position this market to move higher.

Sometimes when you fall into the bears cage, they fight back.

Today they did.
Posted by Palmoni at 7:44 PM