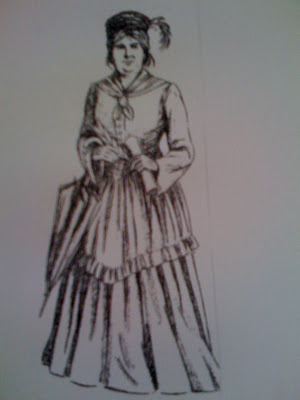 John Quincy Adams used to bathe in the Potomac river, when a "round, unkempt gray-haired woman casually seated on his undergarments, shirts and breeches" and demanded that the President make a statement about the Bank of the United States.

Later, when Adams was asked about Ms. Royall, the President responded, "Sir, she is like a virago errant in enchanted armor."

Born in 1769, she learned under Captain William Royal, who made Anne his "project." She studied Jefferson, Voltaire, and his entire library, including his Masonic teachings. At 47, he fell in love with this enlightened "creation" of 28, and they married, until his death 16 years later.

His rather significant estate was left entirely to her, and the Royall relatives fought it, and ten years later, in 1823 they won, and she was penniless.

She headed to Washington DC to claim her husband's pension, and the Mason's helped her and then, a few years later, the Masonic movement almost came to a halt, as a Royal Arch Mason, William Morgan, was going to expose the secrets of Masonry in his book, Illustrations of Masonry, because the Mason's excluded him from their lodge for being a drunkard. A scandal followed, and he was never seen again.

So the Mason's made a deal with Anne. She could travel the country and report on events at the Mason's expense, as long as she would include some good words in her writings about them. And she did, and she did it wonderfully, and she never let the public forget the politicians or the celebrities.

Anne also endeared herself to the establishment of today, as some call her the first blogger, as she detested the Evangelical movement.
http://www.redroom.com/blog/jeff-biggers/americas-first-blogger-anne-royall-0

In fact, in 1829, she was tried, and found guilty as a common scold. The first two charges of a public nuisance and a brawler were dismissed!

The penalty for being a scold was a $10 fine, and being submerged in water off a duck stool. (Probably where the Bush administration got the idea of water boarding!)

So her traveling around the country stopped, but she soon started another journalistic work, called Paul Pry that exposed government graft, which became required Washington reading, and then after that, the Huntress, whose motto was Jefferson's statement "Education, the main pillar which sustains the Temple of Liberty."

Her last story, in 1854, at 85 was an interview with President Pierce.

He was fully clothed.

To some, Anne Royal was the original muckraker.

But I had to to tie this in with my Shakespeare article, which identifies him as a playwright in the 47th Psalms after a 31 skip sequence.
http://aaronandmoses.blogspot.com/2009/04/shakespeares-april-fool.html

Because it's the voice of 47! Susan Boyle, at 47, was never kissed, but the voice of "round, unkempt gray-haired woman" Anne Royall, was. She married Captain William, when he was 47! And only in 1947 was their another "scold" conviction.

Today, in the WSJ, we see that Justice Paul Stevens, from our Supreme Court, says that Shakespeare, wasn't William, but instead was Edward Devere, the 17th earl of Oxford!

Justice Stevens, who dropped out of graduate study in English to join the Navy in 1941, is an Oxfordian -- that is, he believes the works ascribed to William Shakespeare actually were written by the 17th earl of Oxford, Edward de Vere...

This puts much of the court squarely outside mainstream academic opinion, which equates denial of Shakespeare's authorship with the Flat Earth Society.

"Oh my," said Coppelia Kahn, president of the Shakespeare Association of America and professor of English at Brown University, when informed of Justice Stevens's cause. "Nobody gives any credence to these arguments," she says.
http://online.wsj.com/article/SB123998633934729551.html

What is the source for the drawing of Anne Royall?

Anne Newport Royall - Nancy Bayley aka Peggy Bailey - hero of Ft. Mimms and previously the heir of many a man.

Perhaps it would serve the public to know her signature was N. B.

And Nancy OAKS was her signed name but given the amount of fiction she passed as news..

It is interesting that few historians never fact-checked her writings.

It seems that in 1828 such a thing was done and she was not named.

However the letters between Jackson and the Secretary of War were enumerated and complementary as presented by James Barbour.

Take another look and re-think The Mystery of History.

In fact, in 1829, she was tried, and found guilty as a common scold. The first two charges of a public nuisance and a brawler were dismissed! full cotton mattress , full size blanket , cotton razai price , beautiful sofa covers , velvet bedding