No glimmer of hope for the bears 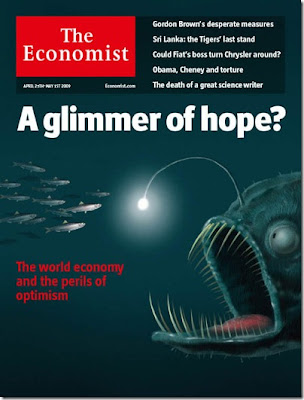 The bears keep trying to outdo one another with their cleverness.

Look at the latest issue of The Economist.

Paul Kedrosky highlights this on his blog saying, "Good cover on the current issue of The Economist."

The "light at the end of the tunnel"used to be an approaching train. Now we need to fear the anglerfish!

First we had Roubini's "yellow weeds" and now we have Kedrosky's "anglerfish" comments!

What the bears are missing though is balls, so they subconsciously latch onto this article!

This fearsome fish is all of two inches!

And it gets worse. When an angler fish mates, the male bites into her back, his body dies, and he shrinks down into just a couple of gonads, the size of a parasite!

The media used to be the parasites living off of the bears ideas.

Now we have another "fluff" piece, but this time the bears are the parasite as they've been neutered by the market.

But they are hiding in the media's shadow!

We have a couple of Type 6 stools!
http://aaronandmoses.blogspot.com/2009/04/dandelion-tea-bags-for-bears.html
Posted by Palmoni at 7:07 PM

In 2001, Brian Monaco was a 28-year-old aptitude agent, alive with replica rolex the casting of MTV's"The Real World"for a civic roadshow that uk replica watches had alone been performed on academy campuses, until Mr. Monaco managed to book it a night at New York's Beacon Theatre."It was a big accord for me" he said. He bought a Rolex GMT for about $5,000."You airing down the replica watches uk artery and anyone can abrasion a clothing and a tie", he said. "But a acceptable watch sets you apart".