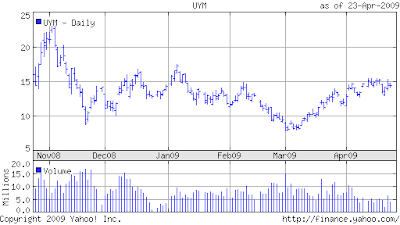 That's the next move with the biggest bang for the buck!

Coal is up, steel is up, the shorts have finally laid off of the fertilizers, because the world economy is turning, and only on Wall Street could they con people into believing that people don't need to eat--even though the restaurants stocks have all tripled and quadrupled from their lows!

But if you're squeamish, and you are afraid, for some ungodly reason, (even though you shouldn't because this market is not coming down, and we are now on the next leg up in this bull market, as I so emphatically said on Tuesday http://aaronandmoses.blogspot.com/2009/04/legs-are-following-off-bears-stool.html ) here's your play.

And that's my play for speculators!
Posted by Palmoni at 12:59 PM