Is the US the "new" Russia? 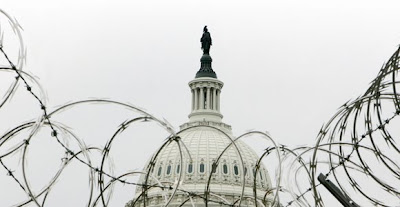 According to the Atlantic Monthly it is, and so says the ex chief economist of the IMF:

The crash has laid bare many unpleasant truths about the United States. One of the most alarming, says a former chief economist of the International Monetary Fund, is that the finance industry has effectively captured our government—a state of affairs that more typically describes emerging markets, and is at the center of many emerging-market crises. If the IMF’s staff could speak freely about the U.S., it would tell us what it tells all countries in this situation: recovery will fail unless we break the financial oligarchy that is blocking essential reform. And if we are to prevent a true depression, we’re running out of time.

Here's the Reader's Digest version of the article:

One thing you learn rather quickly when working at the International Monetary Fund is that no one is ever very happy to see you. Typically, your “clients” come in only after private capital has abandoned them, after regional trading-bloc partners have been unable to throw a strong enough lifeline, after last-ditch attempts to borrow from powerful friends like China or the European Union have fallen through. You’re never at the top of anyone’s dance card.

The reason, of course, is that the IMF specializes in telling its clients what they don’t want to hear..

Almost always, countries in crisis need to learn to live within their means after a period of excess—exports must be increased, and imports cut—and the goal is to do this without the most horrible of recessions...

No, the real concern of the fund’s senior staff, and the biggest obstacle to recovery, is almost invariably the politics of countries in crisis...

Typically, these countries are in a desperate economic situation for one simple reason—the powerful elites within them overreached in good times and took too many risk..

Overborrowing always ends badly, whether for an individual, a company, or a country.

The downward spiral that follows is remarkably steep. Enormous companies teeter on the brink of default, and the local banks that have lent to them collapse. Yesterday’s “public-private partnerships” are relabeled “crony capitalism.”

In its depth and suddenness, the U.S. economic and financial crisis is shockingly reminiscent of moments we have recently seen in emerging markets (and only in emerging markets): South Korea (1997), Malaysia (1998), Russia and Argentina (time and again)...

But there’s a deeper and more disturbing similarity: elite business interests—financiers, in the case of the U.S.—played a central role in creating the crisis, making ever-larger gambles, with the implicit backing of the government, until the inevitable collapse. More alarming, they are now using their influence to prevent precisely the sorts of reforms that are needed, and fast, to pull the economy out of its nosedive. The government seems helpless, or unwilling, to act against them.
http://www.theatlantic.com/doc/200905/imf-advice

It's an overdramatic work of fiction, but it is a good read!

And I'm sure it will be passed around by those bearish!
Posted by Palmoni at 6:59 AM