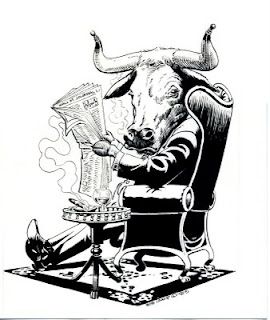 The financials were weak, but that was attributable to two events and nothing more. You had a note by Goldman Sachs that was bearish on them, and tomorrow, Larry, Richard, Lloyd, Ryan, Paul, David, Patrick, Gordon, Christoper, Pam, David, William and Kevin; the unlucky 13 executives of credit card companies, get summoned to the White House for a discussion with Obama regarding credit card fees and rates.

Obama told the bankers that his administration was the only thing that seperated the bankers from pitchforks. So what do you think he'll say to these credit card executives?

After the close, AAPL's earnings, as usual were inscrutable, and QCOM and BRCM are amicably looking to settle their differences, so all of these numbers are trading higher.

So let's look at the bears footprints the last few days.

How did their gang rape on BRCM workout by the bears that slammed this number when they said they would make a hostile bid for ELX? Yesterday BRCM was trading at 18ish in the pre-market; it's now at 24 and change in today's afterhours!

How about the gang rape on ISRG last Thursday in the afterhours at 108? Today it traded at 139. 31 points! How did that work?

Ignore the bears, and their machinations.

Today was just a meaningless churn, by the bears attempting to manipulate the market down again.

Monday they gang raped it.

Today they tackled it.

Tomorrow they'll beg for mercy.
Posted by Palmoni at 6:30 PM