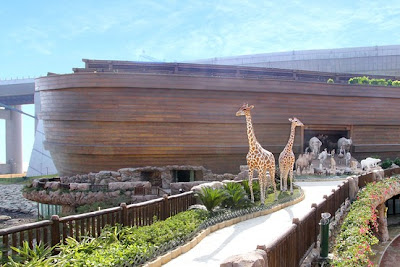 Billionaires building arks? That's something the scientific community just hates. It's fine if a country bumpkin believes, but don't let the billionaires buy into it. People may think the story is true!

So here's the Chinese word for boat.

It consists of the word vessel, eight and mouth/person.

In the selfsame day entered Noah, and Shem, and Ham, and Japheth, the sons of Noah, and Noah's wife, and the three wives of his sons with them, into the ark.

The ark, was the vessel, that saved eight persons.

It was nice that this story was recorded in the Chinese characters whose language pre-dated Hebrew by about 700 years, so maybe you can forgive the Kwok brothers for their embrace of this "myth."

But maybe the Kwok brothers are mathematicians, and they did the "ark math."