The legs are following off the bear's stool 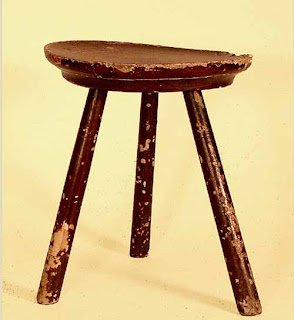 It's now patently obvious that Monday's downdraft was an orchestrated move by the bears to crack the market.

And it's now patently obvious, that we have already had the price and time correction in this bull market.

We corrected 5%; so that was the price correction.

And the time correction was one day.

The fundamentals of the economy are getting better, so we now have had the time correction, even though it was only one day, because the economy is healing that quickly.

And the correction that we had, that was manufactured by the bears, on the heels of the stress test pre-release by a white supremist, means that the desperation of the quants that are short, and those not invested are at a fever pitch---just look at who they had to use!

So the legs of the stool that supported the bears are now broken. And now the bulls will extract every penny from the bears hides who remain short.

After all, it's a milking stool!

The leg of a financial collapse of the financials is gone--do suicides happen at financial tops?

The leg of bearishness from Goldman Sachs is now broken.

The leg of the next depression is now destroyed.

And that's what will happen to the bears, but in an inverse order.

This first leg up already has almost destroyed them, the second leg up will make them broken, and in third leg up they will finally be gone.

That's the stool of the bulls.

And the leg that the bears don't understand, is the leg of the stool that is going to get rammed into Mr. Benjamin N Dover's III posterior.

And that's the next leg up in this bull market!

It's the bulls stool check!

Wouldnt it be funny if this post marks the top for the bear market rally? You may be correct that the rally may have more legs. But it is a product of wholesale manipulation. We are a long way away from real true economic recovery. The market does not know that. The market only speculates on what is going to happen 6 months from now. 6 months from now the market will have priced in a much more serious conditions. But until then, I wouldnt be surprised if it mindlessly rallied. Mark my words, the low of 666 will not hold.

Everyone is looking for "anecdoctal" reasons why the market won't rally, when instead, they should look at why their viewpoint should be wrong!

And why is the rally mindless?

Give me an estimated time frame on when the 666 low will broken.

Wouldn't it be funny if this post marked the start of the second leg up?

I thought I'd bring up this point since you thought the market's previous rise was a product of wholesale manipulation!

I guess we got some more of that Friday with the spike at the close!