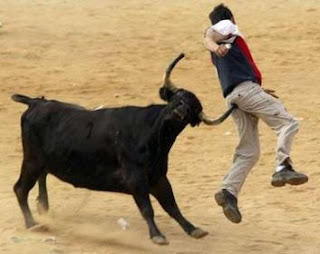 Did you see that pathetic attempt in the last few minutes to drive the market down, only to have it bounce back the last two minutes of the day?

Over at www.minyanville.com Jeff Cooper made the bear's case Thursday morning, with this article:

On Monday, the popular averages entered the window where an interim top was forecast. The week opened with a 90% down day and the worst decline since the early March low. Significantly, in the process, the Weekly Swing Chart turned down for the first time since turning up on the week ending March 13.

And then he reports on his "gnome."

My gnome high in the Appalachians tells me that over the last few days someone was buying hundreds of thousands of 85 Spyder puts and selling hundreds of thousands of Spyder calls. Is this the same group that was jacking up the techs yesterday morning? Someone seems to be making a big bet that the S&P is going to 800 or lower by May expiration.
http://www.minyanville.com/articles/index/a/22347/p/1

This afternoon, he switched gears. He better find a new gnome!

There's a case being made that there's a better-than-average likelihood that the more-than-30% rally in 6 weeks by the S&P through last Friday marks a first leg up as opposed to another bear leg. Why?

But that's the mark of a good trader! To switch positions when the market tells you that you are wrong!

Don't think that you won't see a lot of this in the coming weeks, because we are in the 2nd leg up in this bull market--and it isn't going to wait for anyone bearish.

The market is hot, and the little shorts that these stocks are wrapped around with, are going to ravaged by the starving bulls! A five day old hamburger from McDonalds looks like a steak at Ruth Chris, to someone starving on a desert island!

And speaking of Ruth Chris, I touted that on April 8, on "The cupboards are bare" story.
http://aaronandmoses.blogspot.com/2009/04/cupboards-are-bare.html

But speaking of that, the cows at Ruth Chris' are rather tasty, and RUTH, at $1.60 looks ready to double!

And since I started this story with Cooper, let me get in an advertisement.

Nice moves in two weeks and two days! That's a catch-22 for the bears! So much for the bear's good year!

That is hot action in hot little numbers! What did the bears think, that the world would sit idly by, when all this money can be made at their expense?

That's why they only have a pea shooter!

In the cupboard story, the stocks that should have moved, but didn't, until today, were the fertilizer companies. I suppose that's why I had such sarcastic articles about the bears stool, and their dandelion tea!

After all, the fertilizer cupboards are bare!

Now weren't we supposed to have a story about the bank "stress test" that was supposed to shake the foundations of the earth today and their toxic assets?

It wasn't too toxic was it?

If she want's her research to be actionable, she needs to get rid of her shorts otherwise Meredith's research is going to be the next toxic asset!

Where's the bathroom humour in that? Click on the above link.

Meredith's article was right under the CNBC story with the toilet flush!
Posted by Palmoni at 5:42 PM