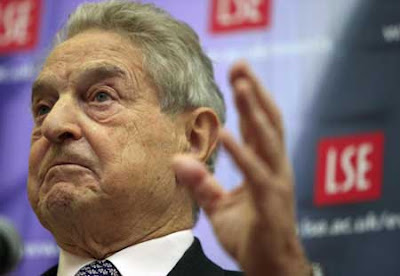 A few days ago, George Soros was telling the world that the recession would last another 10 years.

From TimesOnline on March 28:

George Soros, the man who broke the Bank, sees a global meltdown

We could end up with a depression. “Unless we handle it well then I think we would. The size of the problem is actually bigger than in the 1930s.”

The chances of a depression are, he says, “quite high” – even if that is averted, the recession will last a long time. “Look, we are not going back to where we came from. In that sense it’s going to last for ever.”

He tells us that he has psycho-somatic illnesses – backaches and pains – that tip him off to changes in the market.
http://www.timesonline.co.uk/tol/news/uk/article5989163.ece

Today Soros says the G-20 outcome was much better than expected, and now the depression is off the table.

Maybe Soros' backache went away!
Posted by Palmoni at 7:08 AM