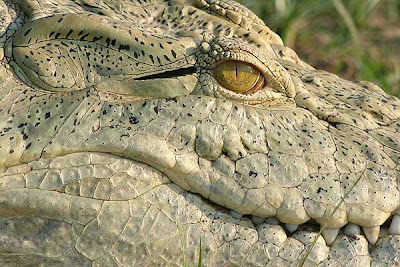 The latest fear point bandied out by the bears is the spread between short rates and long rates. How are short rates so low, when long rates are going up? Supposedly, if the economy is getting better, shouldn't short rates inch up?

But since short rates are so low, doesn't that mean the "fear trade" is in vogue?

Let's look at this argument for a second. The bears parsed BofA's earnings, but didn't they parse BAC's excess liquidity? Where do you think they are parking that extra $130 billion? Where is Morgan Stanley parking their spare change?

Short term rates are low, because the banks are hoarding cash. So trash-can the conspiratorial stories that this spread is a presage for danger. It is, but only to those silly rabbits! Because it's hunting season! And the crocodiles favorite food in neighborhoods is rabbits!

The first silly rabbit is David Rosenberg, strategist from Merrill Lynch. Remember his piece on Wily Coyote? That piece is just another bunch of croc, so appropriately, that rabbit is getting prepared to be eaten!
http://aaronandmoses.blogspot.com/2009/04/trades-gone-awry.html

The next silly rabbit is Pimco's McCulley, who came up with this croc yesterday, when he said, that the economy is in a bottoming process, but not in a recovery.
http://www.bloomberg.com/apps/news?pid=20601103&sid=a8HNh4dOyabw

Why wouldn't he say that? As the largest bond holder in the country, he is on the other end of the curve than the banks, and long rates are going up, pushing down the prices of his bonds. Why would he recognize a recovery when it would hurt his position?

McCulley, of course, is famous for his conversations, with Bun Bun, his Netherlands Pet Bunny.
http://www.pimco.com/LeftNav/Featured+Market+Commentary/FF/2008/GCB+December+2008+McCulley+All+In.htm

In that dialogue, Bun Bun said, "In my world, that’s called the survival of the fittest. Wouldn’t make sense for government to try to overrule that force of nature, I agree."

And that's this Darwinian market. The survival of the fittest. The bears, and the rabbits, are going to get eaten. That's the nature of this bull market beast!
http://aaronandmoses.blogspot.com/2009/03/we-go-higher.html

And the crocodile doesn't need to be fast, when you hunt by ambush!

Even, if it hasn't changed the last few hundred million years!

Now that's an evolutionary thought!
Posted by Palmoni at 8:44 AM

The global warming is not only destroying our environment but is also forcing people to abandon the activities and Event Trend which once were enjoyed by past generations. We must join hands to bring back the fairy meadows.