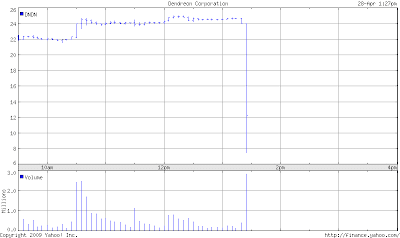 Every short in the world hated Dendreon. They hated it at 8, 7, 6, 5, 4, and 3. Until it spiked on their Provenge news to the high teens, and then it settled in the low 20's. At about 1:30 today, the stock was going to be halted for the release of news. Look at the above chart.

From 1:25 pm EST, to 1.27, the stock dropped from 24 and change to $7.50, and it rallied to $11.81 whereby it was dutifully halted by the NASDAQ. 3 million shares traded hands in 70 seconds. The NASDAQ found nothing wrong with the trading and left all the trades stand.

After the halt Dendreon announced the news that was expected, and it closed at just under 26 in after hour action. Now look at this post on the Yahoo message board:

You had one of the best bear raids in the history of this market, executed in 70 seconds, that took a stock from 24 to 7.5 and ending at 12--a 50% haircut in two minutes on 3 million shares, and the move, and the time of it, were given the heads up by a poster on the Yahoo message boards! And the hapless NASDAQ, let the trades stand!

Now watch the DNDN conspiracy tellers stay all over this story.

I just like the idea that the shorts got burned immensely by the stock; and that today's move were predicted,in advance by a Yahoo message board poster, and that this stock, is once again, the poster child of manipulation in this stock market.

By the shorts, and the longs, and the FDA panels!

But mostly by those that were short!

Because they had the most to lose!
Posted by Palmoni at 10:13 PM