The beast is getting Fed! So where's Waldo? 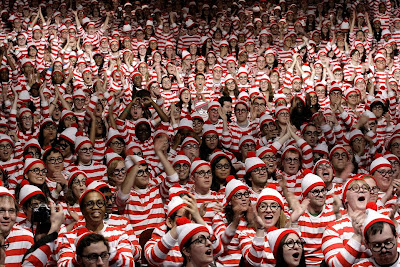 The bull market beast is feasting on shortsellers and under-invested bulls. As advertised here!
http://aaronandmoses.blogspot.com/2009/04/beast-needs-to-be-fed.html

Where is the economist from Moody's who did all the downgrading at the bottom? Who warned us of the coming depression?

Where is he hiding?

Where is George Soros?

Why didn't he get a backache to tell the world we were going higher?
http://aaronandmoses.blogspot.com/2009/04/rising-markets-make-viewpoints-change.html

His backache lasted one day. He disavowed his first backache and went back to the dark side!

Why don't we hear from them now?

It will be the same with these bears!

Today, I'll try and pull a Cramer and become a statesman.

But there's a difference between the Waldos' on Wall Street and the Waldos' from Rutgers.
http://nymag.com/daily/intel/2009/04/rutgers_breaks_guinness_world.html

The ones at Rutgers are smiling!
Posted by Palmoni at 7:27 AM