The action is at the casinos! 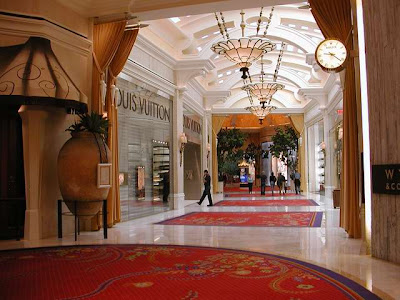 Let's look at what has happened in Las Vegas the last few days.

First Colony Capital said it was interested in working with MGM on City Center.
http://www.marketwatch.com/news/story/colony-capital-may-invest-mgms/story.aspx?guid={04E47BC1-69F9-4859-9F98-9C7E2A4B3766}&siteid=rss

We also saw that Sheldon Adleson of Las Vegas Sands indicated that he was going to finish the construction of the casinos in Macau, and would probably do a joint venture with investors to help accomplish that.
http://www.forbes.com/2009/04/02/vegas-sands-gaming-markets-equity-macau.html?partner=yahootix

Sheldon also put his money where his mouth was, and bought a boatload of shares with his wife on the open market at around 3.

He also added another slug today. The Sands Singapore Casino will have a tax rate 70% lower than Macau, and when this is up and running, it will add materially to Las Vegas Sands bottom line.

Now I liked this stock at $1.77, and advertised here on March 13, when the punk kids from the rating agencies downgraded that number.

Why doesn't China then go and sell some Treasuries, and take a piece of Sheldon Adelson's casino by financing the rest of his construction projects?

You got the buy recommendation on LVS (1.77) yesterday. Their debt was downgraded again by the imperial rating agencies, run by these kids with spreadsheets!

They might as well buy Sands, because people are ready to drink it!
http://aaronandmoses.blogspot.com/2009/03/china-is-worried-about-treasuries.html

Remember that fluff story that day, when we were supposed to be worried about China abandoning Treasuries? Who spins these tales of woe?

Wynn Resorts, which has the best balance sheet of any casino in Vegas, was hammered by shorts who have laid all over this stock.

Now it's time for these 18 million shares shorted to be squeezed.

Their was huge action in the April 30 calls on WYNN today, and they closed at .85. The calls on WYNN are dirt cheap, because option sellers don't know how hard WYNN is going to ramp.

It was up 5 and change today, and it could easily run to 37.

Today, we saw how Obama held court at the G-20, and how the market rallied. Next month, Obama is heading to Las Vegas, and junkets to Sin City will be sanctioned again.

And the stocks will go higher.

Wall Street has been pricing these casino companies aas if they are going out of business. How many other companies did they also pull this scam with? And how many times did people fall for it?

There also has been action in Atlantic City.

Carl Ichan, just put a low bid on the Tropicana for $200 million in bankruptcy, when it supposedly was going to sell for a billion bucks in better times.
http://www.philly.com/philly/business/20090401__200_million_minimum_bid_set_for_Tropicana.html

So take the action at the casinos.

It's just another group that the shorts have laid on where they have overstayed their welcome!

But now, the shortsellers are Wall Street's new "coolers!"

So buy the stocks, and let the coolers pay up for their shorts!
Posted by Palmoni at 8:41 PM