Wait--what happened?? Didn't the charts say we were supposed to puke? Oh that's right. Prechter said that stocks would go down, along with gold.

And now, he'll tell the world that he was "just early" Wall Street gibberish for I was wrong!

At least, when it happened, I called these charlatans on the carpet! 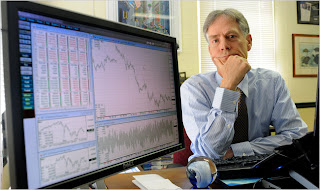 Remember right before the 4th of July--and right before we had a 1000 point rally in the Dow? We had Bob Prechter, in the NY Times, dressed up, and pimping Dow 1,000.

The Dow, which now stands at 9,686.48, is likely to fall well below 1,000 over perhaps five or six years as a grand market cycle comes to an end, he said. That unraveling, combined with a depression and deflation, will make anyone holding cash “extremely grateful for their prudence.”
And how about David Rosenberg??? Who said we were heading into a depression?? Where are these folk now? And how much money did they cost you?? 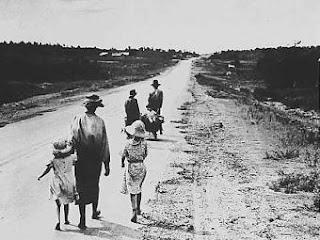 So, we had a huge bounce off the lows, but we had a similar bounce off the lows in 1930. The equity market was up something like 50% in the opening months of 1930, and while I am sure there was euphoria at the time that the worst of the recession and the contraction in credit was over, it’s interesting to see today that nobody talks about the great runup of 1930 even though it must have hurt not to have participated in that wonderful rally. Instead, when we talk about 1930 today, the images that are conjured up are hardly very joyous.
Posted by Palmoni at 7:16 AM