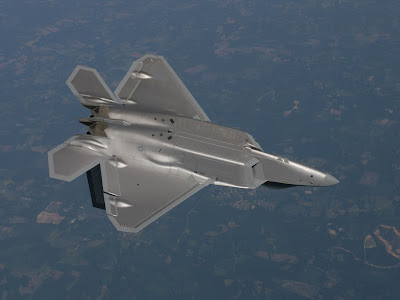 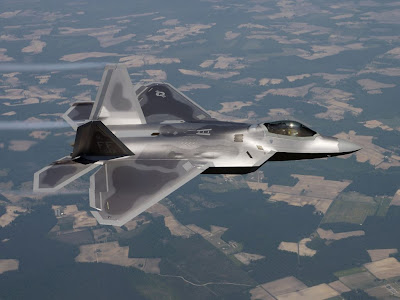 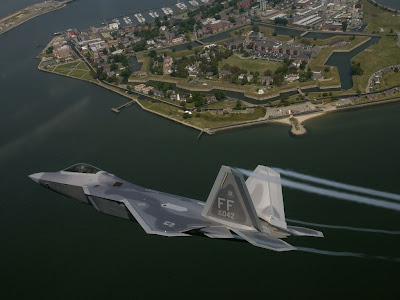 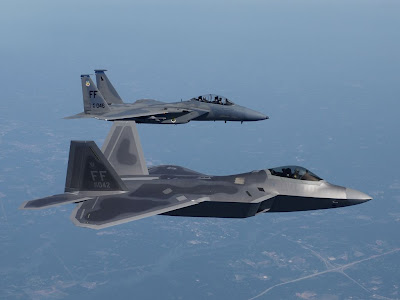 FIRST FA-22 FIGHTERS DELIVERED TO LANGLEY AIR FORCE BASE.
These are Great In-flight Photos of the FA-22 as the first Aircraft Delivery was being made to LangleyAFB in Va. Langley is to be first Operational AFB for the FA-22. It is a very beautiful AFB, located in a Picturesque location, as you can see in these photos, near Norfolk and Hampton, Va.

The Aircraft flying along with the FA-22 in the last of these photos is the F-15, which will be replaced by the FA-22 which is several times better.

In Actual In-flight (simulated) Combat Operations against the F-15, two FA-22s were able to operate without detection while they went head to head against (8) F-15s. The FA-22s scored missile hits (Kills) against all the F-15 Aircraft and the FA-22s were never detected by either the F-15s or Ground Based Radar. Maj. Gen. Rick Lewis said: 'The Raptor operated against all adversaries with virtual impunity; Ground Based Systems couldn't engage and NO adversary aircraft Survived'!

FA-22 -- America 's most advanced fighter aircraft for the 21st Century! They're a titanium and carbon fiber dagger. They're so advanced that if their on-board locator is switched off even our own satellites can lose track of them.

They're the first military aircraft ever built that is equipped with a 'black-out button'. What that means is this:

The best conditioned fighter pilots are capable of maintaining consciousness up to in the vicinity of 15+ G. The Raptor is capable of making 22+ G turns.. If someday an adversary builds a missile that is capable of catching up to one of these airplanes and a Raptor pilot sees that a strike is imminent, he hits the 'b.o.b.' and the airplane makes a virtual U-turn, leaving the missile to pass right on by. They know that in the process he will temporarily lose consciousness, so the Raptor then automatically comes back to straight and level flight until he wakes back up. 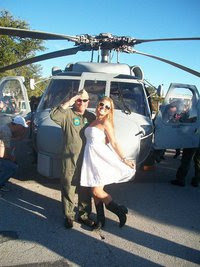 An if our troops with a helicopter have this response, what do you think will be the result of the FA-22??
Posted by Palmoni at 10:39 AM

The only real question is why they are even manned by a pilot to begin with.

It would seem that today, with aircraft operating at conditions that surpass human endurance, that they even bother putting a pilot in them.