In Singapore, they pay to play! 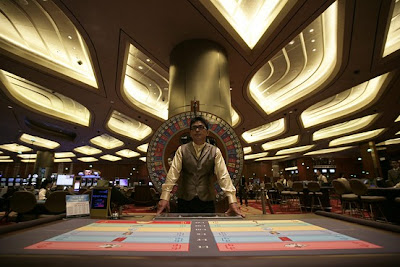 And the $77 surcharge doesn't stop the punters!

Some observers, including the brokerage and financial-services firm CLSA Asia-Pacific, predict the city-state’s gaming earnings will exceed those of the Las Vegas Strip within two years. CLSA reported it expects $6.5 billion in Singapore gaming revenue in calendar year 2011; the Las Vegas strip reported revenue of $5.6 billion in its 2010 fiscal year ending in June.

While the city-state is probably happy that its efforts to revitalize tourism are working, it says it will keep a wary eye on the local appetite for gambling. So far, its plan to discourage locals from squandering money at the casinos – city-state citizens and permanent residents must pay an extra 100 Singapore dollar (US$77) entry fee – doesn’t seem to be working.

Locals have made more than one million visits to Singapore’s casinos so far this year – a potential S$100 million bonus in revenue for the city-state, a windfall that will be added to the government’s already bulging coffers. (There is a S$2,000 annual pass that locals can buy.) At the Marina Bay Sands, for instance, locals accounted for about 38% of all visitors during the three-month period ending in September.

The government hasn’t made any noises so far about raising the surcharge, but if the flow of Singaporeans through the gates doesn’t moderate, don’t be surprised to see the city-state slap some new curbs on the operators. The government has already cracked down on the casinos for offering “extras” to locals, including free bus rides from the suburban housing estates to the casinos.
Posted by Palmoni at 9:16 AM