Warren Buffett, who said that we were on an economic Pearl Harbor and heading for a Great Depression, now gives an op-ed thanking Uncle Sam for saving the world. Some more folksy disingenuousness from Mr. Buffett, who was one of the greatest benefactors sucking up on the Government's tit. And now, since he has a belly full of milk, and since it has been a while since his cohort, Charlie Munger, told the unemployed and those in economic distress  to just "suck it up and cope" and that we should "thank God for bank bailouts" because otherwise we would of given rise to another "Adolf Hitler" we have, Warren, selling the masses again, via the NY Times, with a milk fart speech, where the masses, once again, don't realize they are being sold by Wall Street's greatest salesman: 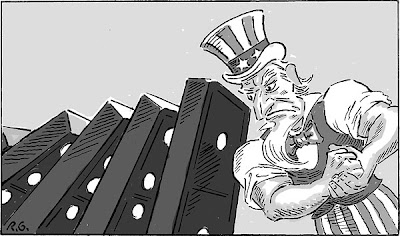 My mother told me to send thank-you notes promptly. I’ve been remiss.

Let me remind you why I’m writing. Just over two years ago, in September 2008, our country faced an economic meltdown. Fannie Mae and Freddie Mac, the pillars that supported our mortgage system, had been forced into conservatorship. Several of our largest commercial banks were teetering. One of Wall Street’s giant investment banks had gone bankrupt, and the remaining three were poised to follow. A.I.G., the world’s most famous insurer, was at death’s door.

Many of our largest industrial companies, dependent on commercial paper financing that had disappeared, were weeks away from exhausting their cash resources. Indeed, all of corporate America’s dominoes were lined up, ready to topple at lightning speed. My own company, Berkshire Hathaway, might have been the last to fall, but that distinction provided little solace.

Nor was it just business that was in peril: 300 million Americans were in the domino line as well. Just days before, the jobs, income, 401(k)’s and money-market funds of these citizens had seemed secure. Then, virtually overnight, everything began to turn into pumpkins and mice. There was no hiding place. A destructive economic force unlike any seen for generations had been unleashed.

Only one counterforce was available, and that was you, Uncle Sam. Yes, you are often clumsy, even inept. But when businesses and people worldwide race to get liquid, you are the only party with the resources to take the other side of the transaction. And when our citizens are losing trust by the hour in institutions they once revered, only you can restore calm.

When the crisis struck, I felt you would understand the role you had to play. But you’ve never been known for speed, and in a meltdown minutes matter. I worried whether the barrage of shattering surprises would disorient you. You would have to improvise solutions on the run, stretch legal boundaries and avoid slowdowns, like Congressional hearings and studies. You would also need to get turf-conscious departments to work together in mounting your counterattack. The challenge was huge, and many people thought you were not up to it.

Well, Uncle Sam, you delivered. People will second-guess your specific decisions; you can always count on that. But just as there is a fog of war, there is a fog of panic — and, overall, your actions were remarkably effective.

I don’t know precisely how you orchestrated these. But I did have a pretty good seat as events unfolded, and I would like to commend a few of your troops. In the darkest of days, Ben Bernanke, Hank Paulson, Tim Geithner and Sheila Bair grasped the gravity of the situation and acted with courage and dispatch. And though I never voted for George W. Bush, I give him great credit for leading, even as Congress postured and squabbled.

You have been criticized, Uncle Sam, for some of the earlier decisions that got us in this mess — most prominently, for not battling the rot building up in the housing market. But then few of your critics saw matters clearly either. In truth, almost all of the country became possessed by the idea that home prices could never fall significantly.

That was a mass delusion, reinforced by rapidly rising prices that discredited the few skeptics who warned of trouble. Delusions, whether about tulips or Internet stocks, produce bubbles. And when bubbles pop, they can generate waves of trouble that hit shores far from their origin. This bubble was a doozy and its pop was felt around the world.

So, again, Uncle Sam, thanks to you and your aides. Often you are wasteful, and sometimes you are bullying. On occasion, you are downright maddening. But in this extraordinary emergency, you came through — and the world would look far different now if you had not.

So in honor of Ms. Palin, I have a new nickname, for our economic Pearl Harbor, bailout spouting, grateful nephew:

Bristol Buffett!!
Posted by Palmoni at 7:40 AM

Let’s not worship at the throne of Mr. Buffett…What he donates is tax deductible which means his estate will get a huge tax write-off. You and I will get to pick up the tab for his great donation as well.