Big banks could lose $134 billion if mortgage securities are put back to them, according to Compass Point Research & Trading.
Barrons:

JUST WHEN AMERICA'S MAJOR BANKS seem to be back on their feet, having paid back federal bailout money and cranked up their employee bonus programs, a new threat has emerged that could seriously affect their earnings power over the next few years.

The potential liability facing bankers arises from the $2 trillion in subprime, alt-A and option-adjustable rate mortgages that they underwrote and sold to investors, mostly as mortgage-backed securities during the home-lending boom of 2005 to 2007. The losses on the mortgages will be horrendous before the dust settles—over $700 billion on these and other so-called nonagency mortgage securities, according to New York mortgage-research specialist and broker Amherst Securities Group.

And now investors—from the federal housing giants Fannie Mae (ticker: FNMA) and Freddie Mac (FMCC) to major bond managers like closely held Pacific Investment Management and BlackRock (BLK)—are fighting back. They are seeking to put back the mortgages to the banks from whence the investment flotsam came and force the banks to eat much of the mortgage losses.

The argument hinges on the arcane contract principle of representations and warranties, known as reps and warranties in legal jargon. Namely, did the mortgages go bad because of the unanticipated nationwide collapse in home prices (a so-called exogenous factor) or are the banks responsible for the mess because they "misrepresented" to the mortgage purchasers the shoddy quality of the mortgages they put in securities and pools?

Now why is Bernanke so gung ho on QE2?  Check out this in the WSJ: 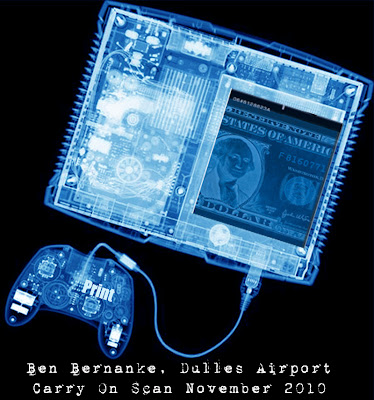 Federal Reserve Chairman Ben Bernanke's $600 billion quantitative easing program has been roundly criticized in this country and around the world. So why is he doing it? Does he know something the rest of us don't?

Mr. Bernanke claimed earlier this month in a Washington Post op-ed that "higher stock prices will boost consumer wealth and help increase confidence, which can also spur spending." But, as Mr. Bernanke must know, the Japanese have been trying to influence their stock market for 20 years, with little effect on their economy. It is also unlikely, as some claim, that the Fed chairman is whipping up a stealth stimulus or orchestrating a currency devaluation. He knows these have been tried and are more likely to destroy jobs than create them.

I have a different explanation for the Fed's latest easing program: Without another $600 billion floating through the economy, Mr. Bernanke must believe that real estate (residential and commercial) would quickly drop, endangering banks..

Like it or not, banks are still weak, and another panic may be on its way. Bank of America is the best example. As of Sept. 30, its balance sheet claimed a book value (assets minus liabilities) of $230 billion. But the stock market values the company at just $118 billion. Who's right? Usually the stock market is ahead of bad news and write-offs.
-------- 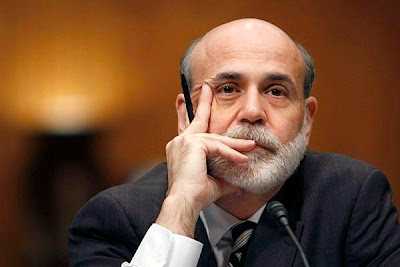 Of course Bernanke knows this. He wants to protect his banker's buddies bad loans.

And give the finger to the taxpayer who is covering the bill!
Posted by Palmoni at 9:45 AM