$137 billion bailout for Ireland on deck 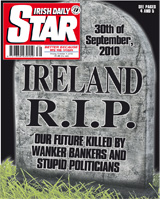 BRUSSELS—Senior European officials laid the groundwork for a bailout of Ireland that could reach €100 billion ($136 billion), saying experts would travel this week to Dublin to examine the country's finances amid alarm about the dire straits of the Irish banking system.

Several euro-zone countries urged Ireland to adopt an aid package, according to people familiar with the matter, and some pressed for the package to include direct loans from the U.K. alongside assistance from Europe and the International Monetary Fund. Britain is in the European Union but not the euro zone...

"The lessons of that experience…is you want to do this quickly and decisively and not wait," he said, though he declined to offer specific views about Ireland's predicament.

The EU can't provide help unless Ireland asks for it, and negotiations looked set to continue into a second day of meetings Wednesday. Among the sticking points: Ireland is reluctant to surrender its own economic planning to the IMF, while several countries are making strict IMF oversight a condition of their help.

Europe left little doubt, though, that it is ready to jump in. At a news conference late Tuesday after the meeting broke up, EU economy commissioner Olli Rehn spoke of "intensifying preparations for a potential program." Klaus Regling, chief of the new euro-zone bailout agency, said he could deliver "substantial" funds "within days."

It's just tough to get bearish, when every problem gets papered over with billions and billions of dollars.

Just once--won't someone go and tell the banks to shove it?
Posted by Palmoni at 8:41 PM

However, the real difference between Ireland and Greece is that the leaders of the former still have enough time to decide about the solution to save the banks in their country. As for Greece, the country was not able to accumulate enough resources, which consequently led to its total dependence on the EU.