Here's a repost of my very first trade in the stock market. It shows where my cynicism of Wall Street started! But now, I'm thankful for that! 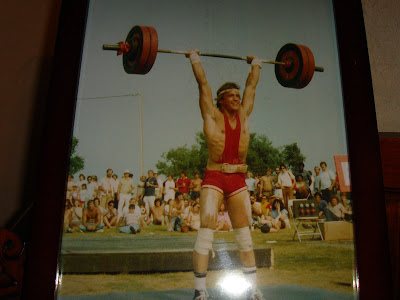 So I figured I would invest it on Wall Street.

So I went to the college library to read the Wall Street Transcript (which then was hundreds of dollars) and all the pros were talking about were gold and oil. That just didn't stick into my gut, so I decided to go to the gym.

At that time, there was one exercise that I could outlift just about anybody at, and that was taking a barbell off a rack at shoulder height, and pushing the weight overhead. Even then, when I was still a few years away from my maximum lifts, I could put 352 over my head, and do 308 for about 6-8 reps rather easily.

And then I knew what my next trade was.

See, my lifts had gone up because I was now lifting at a gym that didn't have a ceiling. When you lift in a Wisconsin basement, you always had to be careful, when you put the weights over your head, because you didn't want to hit the copper pipes.

Now I didn't have that fear. I could just push the weight up, and pop myself under it. That lift, where you put the weight, from the floor to over your head is called the clean and jerk. The part from the shoulders, was just called the jerk. That now was the easy part! I didn't have to contend with the copper pipes in the ceiling!

Then the trade hit my head.

Since interest rates were rather high, I thought that if rates would start going down, people will start buying houses, and every house has a basement full of copper pipes.

So I was going to invest in copper!

So I left the gym and went straight back to the library!

So I looked for a copper company, and I found Kennecott Copper. At that time, I had no idea how stocks moved, but the stock was around 24, and the May 30 call options were only at 1/16. I figured, I could buy 100 contracts at $6.25, and with commissions, probably be in for $700 or so. I thought that even if the option moved to a quarter, I could triple my money.

So on Tuesday, of the next week, I went down to Merrill Lynch, which was located in the MGIC building in downtown Milwaukee to open an account and buy my options in Kennecott Copper.

I was met by Bill Schaeffer, a VP and Merrill Lynch veteran. He tried to dissuade me, but I was insistent. He said that if I really wanted to gamble, I should buy 50 shares of Caesar's. I said no, that I wanted to put my money in copper. I just didn't know any better, and what did he know anyway, about copper pipes? He wasn't lifting in the basement!

I then had to fill out these option forms, and after Mr. Schaeffer got my forms back, he said that he wouldn't be able to put the trade in, as I was putting my whole net worth in.

I said, but I have a car! (I didn't--it was my roommates 1973 rusted out LeSabre) He asked me how much it was worth, but it wasn't sufficient. He could buy stock for me, but he wouldn't buy the options.

What would a stock do for me? Nothing. I needed to make money to pay my deferred tuition bill, and what difference did it make if I had to call home for $1500 or $700? I would still be asking for money, so figured I was taking a chance with Dad's coin anyway!

So I left Merrill without a trade, and a pocket full of $800, and went back to my house, and split up the money with my brother who wanted to go in with me on my bet. On Thursday I checked the paper saw that Kennecot has started to creep up already after he wouldn't let me buy the options. The options had already moved to 3/16.

On Sunday, when I was eating lunch in the cafeteria, my buddy from the weight room, who I told that I was buying Kennecott Copper options, came running up to me with his arms wildly waving, and then he hit me with the news.

"Standard Oil of Ohio is going to buy Kennecott for $62 a share! You're rich!!!"

Rich? That son of a b*tch wouldn't let me put the trade in!

So I called the broker Monday and asked him about Kennecott Copper, and he said that they couldn't open the stock, but it looked like it was going to around 55.

So I took his 1973 rusted out LeSabre, and I stopped at every McDonald's at the outskirts of Milwaukee, and every McDonald's that I knew in the city (McDonald's hadn't expanded that much yet in 1981!) and picked up from every restaurant the Monopoly game card, hoping to get the ticket with the winning prize of $250,000, because I was going to win back the money that Merrill Lynch took away.

We know how that story ended. No monopoly money for me from McDonald's!

On Thursday, Merrill Lynch called me.

They had now reconsidered my option application, and now, they had another broker that would handle my option trades for me.

Apparently, they thought "I knew something."

I knew better than to trust in Wall Street ever again!
Posted by Palmoni at 1:59 PM

What is the point of wearing a shirt if your nipples are showing?

anyone taking the bet that the nipple wonderer missed the rally?

That is a great story! If I were to sink what I have left to get out of a similar hole - where would you suggest I put it? Thanks Pal

Pal wondering if you think it's time to sell silver?