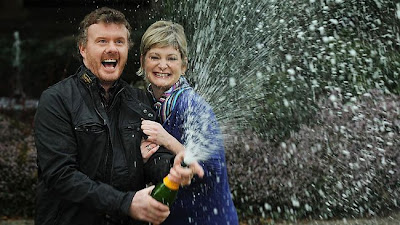 And she dumped him 10 years ago.

A $90 MILLION lottery winner has been forced to give a share to the ex-wife who dumped him 10 years ago.
Divorced Nigel Page, 44, was sued by Wendy after his EuroMillions lottery jackpot this year, even though she left him for another man in 2000.
Friends told The Sun newspaper in the UK that Wendy, 43, - the mother of his 13-year-old daughter - wanted $13 million. She got $3.22 million in an out of court settlement.
Yesterday the divorcee - who has since split with her lover - clutched a bottle of Champagne as she left her luxury waterfront home with a new man she has found.
Posted by Palmoni at 11:36 AM