Disney on deck with earnings Thursday 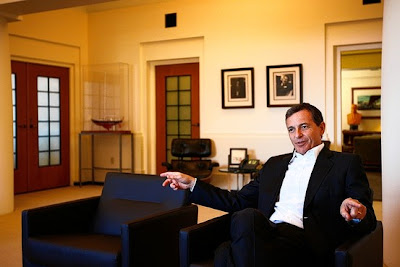 DIS reports earnings on Thursday. Meanwhile, you have pieces like this in the WSJ about Disney's CEO Iger:

While many of his peers hoarded cash during the downturn, Robert Iger, chief executive of Walt Disney Co., doubled down, investing in entertainment businesses, theme parks, new technology and other infrastructure and counting on the weak economy to keep a lid on construction costs.

Disney just launched a new cruise ship, is expanding its California Adventure and Hong Kong Disneyland theme parks, and is building a new resort in Hawaii. The company is also integrating Marvel Entertainment and its stable of comic-book heroes, which Disney bought last December for $4.3 billion, as well as Playdom, a maker of games for Facebook users, acquired this summer for $563 million.

Last week, with the home-video release of "Toy Story 3," Disney unveiled Keychest, an initiative that automatically gives buyers of its films on DVD or Blu-ray disc access to an online streaming version...

WSJ: Your newest cruise ship, the Disney Dream, was the first of several billion-dollar parks-and-resorts investments to come to fruition. You started making many of these expansions amid the recession. Why?

Mr. Iger: In some cases we started before the recession, and some cases we were in it. Our construction costs have tended to be lower because we built in the downturn.

WSJ: What if there's a double-dip recession, or the recovery stalls?

Mr. Iger: If it comes, there are levers we can pull to [reduce] operating costs that are tied mostly to demand, not to reduce quality of service. But we don't see that happening. If we continue with modest improvement, then we feel we're fully capable of absorbing these additional investments.

Does anybody not think that Disney's numbers will be robust when puff pieces in print come out before earnings?

The calls on this name are cheap play on an upside.

And the WSJ has already given you the script!
Posted by Palmoni at 9:46 AM

So what are you buying?

I have the Dec 38s just a cheap spec