Woman robs McDonalds with a spanx girdle for a mask 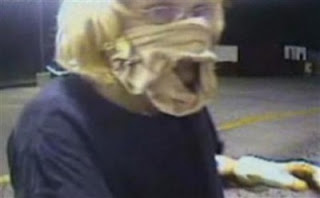 An unemployed woman who said she was desperate for money has been arrested on charges she robbed an Oklahoma McDonald's with a white stretch girdle wrapped around her face as a makeshift mask.

Authorities said 51-year-old Sharon Lain of Midwest City admitted to being the underwear-masked bandit who made off with the contents of a cash drawer from the fast-food restaurant around 3 a.m. Tuesday.

A surveillance video captured the woman on tape and was broadcast on local television, prompting several tips that led police to a condemned home on Wednesday night where Lain was found living, said Midwest City Police Chief Brandon Clabes.

Police found the underwear - a white stretch girdle known as 'spanx' - along with illegal drugs, including methamphetamine.
Posted by Palmoni at 8:14 PM