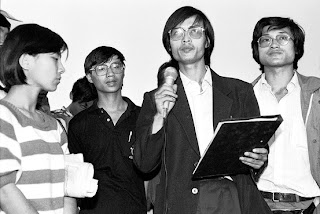 He's on the far right above as a Tiananmen Square protester, and with Buffett below. 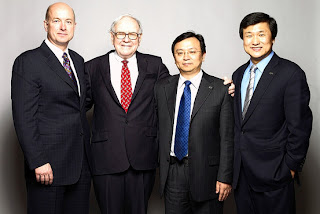 Twenty-one years ago, Li Lu was a student leader of the Tiananmen Square protests. Now a hedge-fund manager, he is in line to become a successor to Warren Buffett at Berkshire Hathaway Inc.

Mr. Li, 44 years old, has emerged as a leading candidate to run a chunk of Berkshire's $100 billion portfolio, stemming from a close friendship with Charlie Munger, Berkshire's 86-year-old vice chairman. In an interview, Mr. Munger revealed that Mr. Li was likely to become one of the top Berkshire investment officials. "In my mind, it's a foregone conclusion," Mr. Munger said...

The Chinese-American investor already has made money for Berkshire: He introduced Mr. Munger to BYD Co., a Chinese battery and auto maker, and Berkshire invested. Since 2008, Berkshire's BYD stake has surged more than six-fold, generating profit of about $1.2 billion, Mr. Buffett says. Mr. Li's hedge funds have garnered an annualized compound return of 26.4% since 1998, compared to 2.25% for the Standard & Poor's 500 stock index during the same period.

But hiring Mr. Li could be risky. His big bet on BYD is his only large-scale investing home run. Without the BYD profits, his performance as a hedge-fund manager is unremarkable.

It's unclear whether he could rack up such profits if managing a large portfolio of Berkshire's.

What's more, his strategy of "backing up the truck," to make large investments and not wavering when the markets turn down could backfire in a prolonged bear market. Despite a 200% return in 2009, he was down 13% at the end of June this year, nearly double the 6.6% drop in the S&P-500 during the period.
Posted by Palmoni at 12:26 AM