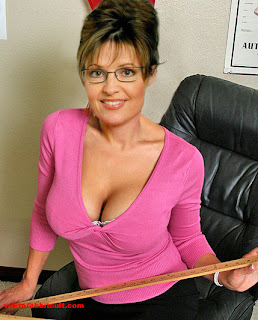 I suppose we need a picture of her that is as real as her words!

Because she now claims she's Shakespeare!

The former vice-presidential candidate, who regularly uses the social networking website to communicate her views, made three attempts before writing an error-free Twitter entry, which can only contain 140 characters.

In her first effort, she asked "peaceful Muslims to "pls refudiate" the mosque. Having invented a word, in her second attempt she used "refute" incorrectly, calling on "peaceful New Yorkers to "refute the Ground Zero mosque plan".

Both those messages were removed from her Twitter page, though not before being salvaged by US news websites. The third attempt remains. 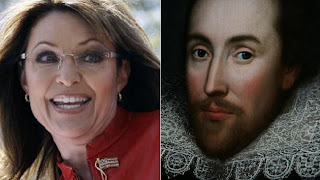 By way of explanation for her errors, the former Alaska governor posted a fourth "tweet" that said "English is a living language. Shakespeare liked to coin new words too".

Well, I guess that's true. Shakespeare now made the Urban Dictionary for "refudiate."

"When Sarah Palin decides regular English words aren't good enough, she'll just go ahead and make a new one. Here, Refudiate bridges the gap between "refuse" and "repudiate", to mean exactly what she wants it to mean."

I believe with the word "repudiate", Sarah was thinking of "refute" -- note "refuse", as the above author speculates.

There are many common mistakes made in the use of English language. For example, there is no such word as "incentivize" but we hear business people use it all the time. Similarly, "irregardless" (not a word) is used instead of "irrespective".

But for these common gaffs, the offenders are not commonly given as much grief as the writer above has given Sarah.

Get off her back, Sir. You are splitting hairs.