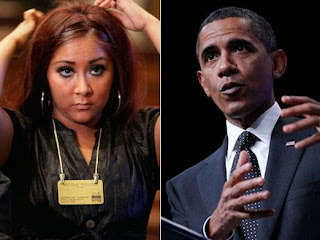 First, Snooki took on Obama over Twitter. Then, Obama said he didn't even know who she was. And on Thursday night's second season premiere of MTV's "Jersey Shore," Snooki took the ball back, and went after Obama again.


In one scene, Snooki -- with her impressively orange tan -- broke the shocking news that she's been staying away from her home away from home: Tanning salons.


Snooki was referring to a provision in the Health Care and Education Reconciliation Act that mandates tanning salons impose a 10 percent tax on UV-ray sessions.

"Obama doesn’t have that problem. Obviously," she said.
Posted by Palmoni at 8:52 AM