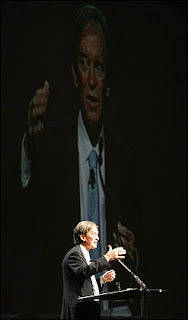 Oh My!! What will the bears say now? First it was Rosie, and now it's PIMCO's Bill Gross!!

Bill Gross, who runs the world's biggest mutual fund, takes a seat in a conference room and makes a confession. Overlooking the ocean at the headquarters of Pacific Investment Management Co., Gross describes missteps that doomed his bond firm's earlier experiment with equities.

At meetings where Pimco set its strategies, Gross's bond traders overwhelmed the firm's handful of equity managers, shooting down their bullish arguments promoting stocks. With limited freedom to pursue their investing ideas, the equity managers quit after about two years.

"Those sessions basically said, 'Hey, we're a bond shop. This is what we're going to do. It's the party line,' " said Gross, 66, "If I've been a problem, then I can be the solution in terms of allowing equity investments to grow and prosper."

Pimco, which has been synonymous with bonds for almost four decades, is taking another run at equities. It might not be the most propitious time to plunge into stocks. Volatility, as measured by the Chicago Board Options Exchange Volatility Index, was at a 14-month high in late May, as the sovereign debt crisis swept through Europe.

Driving Pimco's move into equities is its chief executive, Mohamed El-Erian, who says the global economy is entering a period of fundamental transformation he calls the "new normal."

El-Erian says mounting deficits and tighter financial regulation will dampen growth in the United States and the euro zone for the next three to five years. Emerging-market nations such as Brazil and China, with stable levels of government debt and expanding middle classes, should continue to thrive, he said.

In the new normal, investors will be faced with anemic returns and they'll seek alternatives, said El-Erian, who's embracing several new asset classes. In the past year, he's presided over the creation of an equity mutual fund and a unit to invest in hedge, real estate and buyout funds. Pimco has also started 10 exchange-traded funds, or ETFs.

"We are living through a remarkable time of change," said El-Erian, 51, who shares the title of chief investment officer with Gross. "We want to make sure we navigate the changes for our clients."

Not everyone agrees with this analysis from Newport Beach, Calif.-based Pimco. Some U.S. Cabinet officials and securities analysts said El-Erian's new normal is off the mark.

More than 2,000 forecasters set price estimates showing the Standard & Poor's 500-stock index will jump 26 percent in the 12 months through May 2011 as corporate profits rise, according to data compiled by Bloomberg....

any thoughts on mpg, yrcw?

Palmoni, do you know why we had the correction drag out a bit and why are we suddenly going back up?

look at the interest in BIIB, and then look at the ancillary moves in HGSI and DNDN--all because GENZ is in play

that tells you that people are looking to make money people

remember frugal fatigue? Where the consumer got tired of squirreling every penny away for a rainy day?

and now they want to make some money

the winds can shift quickly--and then, you won't hear a beep from all these trolls that suffer such indignation because someone espouses a bullish viewpoint

those folks got a reprieve in the latest pullback, and they thumped their chests, right before the market is ready to beat them into obscurity again

but I see why people are attracted to them--the bulls, myself included don't throw a lot of statistical info that the people can get their hands into

but it is there everywhere

heck, then I couldn't tout them for their disbelief

the facts are out there but if they don't have to swallow it with some faith heck they can stay bearish to their own peril!!

I am Glad i ran across this site.Added aaronandmoses.blogspot.com to my bookmark!