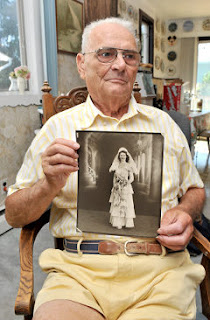 The day after he lost his wife of 62 years, George Baumann was hit with still more awful news.

A hard-hearted bank abruptly reneged on a loan the ex-city worker needed to pay off heavy debts that leave him with almost nothing at the end of the month.

Hanover Community Bank decided not to give Baumann the $271,000 mortgage he and his wife had closed on six days earlier.

Without the much-needed refinancing, he's left to grapple with money woes even as he mourns.

"It's a little bit lonesome since she died," Baumann, 84, said yesterday at the Baldwin, L.I., ranch house where the couple lived for almost 50 years. "Florence had a lot of charisma. Everybody loved her.

The grandfather of three, who grew up in Ridgewood, Queens, and spent World War II in an Army tank-transport unit in France, decided to refinance the house where he and Florence, a former secretary, raised their two kids.

He wanted to clear up debt he'd incurred to help out his family.

The couple closed on the loan on May 7 and went out for dinner that night for a double celebration - it was also their wedding anniversary.

Florence, 82, died of a heart attack on May 12. On May 13, Hanover said it wouldn't fund the mortgage. Baumann doesn't understand why.

Five-sixths of the couple's joint income comes from his Social Security and pension payments. He worked at the city Department of Environmental Protection for nearly 30 years and was in charge of the Jamaica, Queens, water pollution control plant before he retired.

"The bank wouldn't be taking any risk by lending to me," said Baumann, who has an excellent credit score of 794. "It's not like I'm going to lose my job."

The $1,475 monthly mortgage payment on the 30-year fixed-rate loan would have been $1,800 less than what he'd been shelling out before the refinancing.
Posted by Palmoni at 9:52 AM