The Ag lady who was forced to resign, beat out the USDA for $13 million in lawsuit 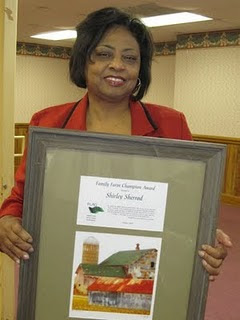 But it's not the first time Sherrod faced off against the federal government. Days before she was appointed to the USDA post last year, her group reportedly won a $13 million settlement in a longstanding discrimination suit against the USDA known commonly as the Pigford case.

The Rural Development Leadership Network announced last summer that New Communities Inc. -- a group Sherrod formed with husband Charles, who is a civil rights activist, and with other black farmers -- had reached the agreement. The RDLN said the USDA had "refused" to offer new loans or restructure old loans to members of New Communities, leading to the discrimination claim.

The announcement said that in addition to the $13 million to New Communities, Shirley and Charles Sherrod would each get $150,000 for "pain and suffering."

A USDA official told FoxNews.com on Tuesday that the settlement had "nothing to do with" Sherrod's hiring last year -- likewise, the official said her resignation was only the result of her comments in the video.

"This is all about her comments," the official said.
Posted by Palmoni at 8:56 PM