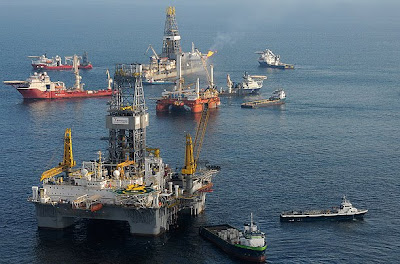 Time magazine:
President Obama has called the BP oil spill "the worst environmental disaster America has ever faced," and so has just about everyone else. Green groups are sounding alarms about the "Catastrophe Along the Gulf Coast," while CBS, Fox and MSNBC slap "Disaster in the Gulf" chryons on all their spill-related news. Even BP fall guy Tony Hayward, after some early happy talk, admitted the spill was an "environmental catastrophe." The obnoxious anti-environmentalist Rush Limbaugh has been a rare voice arguing that the spill — he calls it "the leak" — is anything less than an ecological calamity, scoffing at the avalanche of end-is-nigh eco-hype.

Well, Rush has a point. The Deepwater explosion was an awful tragedy for the 11 workers who died on the rig, and it's no leak; it's the biggest oil spill in U.S. history. It's also inflicting serious economic and psychological damage on coastal communities that depend on tourism, fishing and drilling. But so far — while it's important to acknowledge that the long-term potential danger is simply unknowable for an underwater event that took place just three months ago — it does not seem to be inflicting severe environmental damage. "The impacts have been much, much less than everyone feared," says geochemist Jacqueline Michel, a federal contractor who is coordinating shoreline assessments in Louisiana.

Yes, the spill killed birds — but so far, less than 1% of the birds killed by the Exxon Valdez. Yes, we've heard horror stories about oiled dolphins — but, so far, wildlife response teams have collected only three visibly oiled carcasses of any mammals. Yes, the spill prompted harsh restrictions on fishing and shrimping, but so far, the region's fish and shrimp have tested clean, and the restrictions are gradually being lifted. And, yes, scientists have warned that the oil could accelerate the destruction of Louisiana's disintegrating coastal marshes — a real slow-motion ecological calamity — but, so far, shorelines assessment teams have only found about 350 acres of oiled marshes, when Louisiana was already losing about 15,000 acres of wetlands every year. 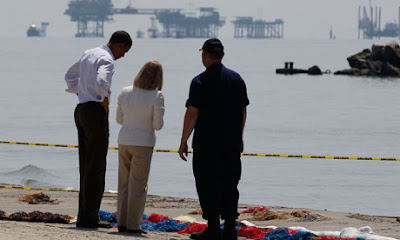 Where's the oil? Blame oil eating microbes that are sucking up the oil in a freeding fenzy!

Where is all the oil? Nearly two weeks after BP finally capped the biggest oil spill in U.S. history, the oil slicks that once spread across thousands of miles of the Gulf of Mexico have largely disappeared. Nor has much oil washed up on the sandy beaches and marshes along the Louisiana coast. And the small cleanup army in the Gulf has only managed to skim up a tiny fraction of the millions of gallons of oil spilled in the 100 days since the Deepwater Horizon rig went up in flames.

Perhaps the most important cause of the oil’s disappearance, some researchers suspect, is that the oil has been devoured by microbes. The lesson from past spills is that the lion’s share of the cleanup work is done by nature in the form of oil-eating bacteria and fungi. The microbes break down the hydrocarbons in oil to use as fuel to grow and reproduce. A bit of oil in the water is like a feeding frenzy, causing microbial populations to grow exponentially.

Typically, there are enough microbes in the ocean to consume half of any oil spilled in a month or two, says Howarth. Such microbes have been found in every ocean of the world sampled, from the Arctic to Antarctica. But there are reasons to think that the process may occur more quickly in the Gulf than in other oceans.

Microbes grow faster in the warmer water of the Gulf than they do in, say, the cool waters off Alaska, where the Exxon Valdez spill occurred. Moreover, the Gulf is hardly pristine. Even before humans started drilling for oil in the Gulf — and spilling lots of it — oil naturally seeped into the water. As a result, the Gulf evolved a rich collection of petroleum-loving microbes, ready to pounce on any new spill. The microbes are clever and tough, observes Samantha Joye, microbial geochemist at the University of Georgia. Joye has shown that oxygen levels in parts of the Gulf contaminated with oil have dropped. Since microbes need oxygen to eat the petroleum, that’s evidence that the microbes are hard at work.

The controversial dispersant used to break up the oil as it gushed from the deep-sea well may have helped the microbes do their work. Microbes can more easily consume small drops of oil than big ones. And there is evidence the microbes like to munch on the dispersant as well. 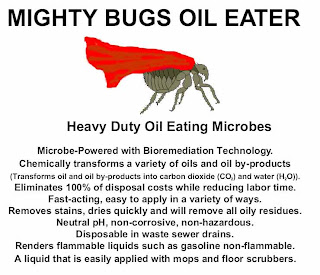 Remember's China's big oil spill? They just unleashed bacterial to clean it up:

Beijing, July 20 – Over 23 tonnes of oil-eating bacteria are being used to clean up an oil spill off the coast of northeast China’s Dalian City, four days after pipelines exploded near one of China’s largest oil reserve bases.

‘We received orders Saturday morning from the Maritime Safety Administration for bio-oil-absorbing products,’ said Yang Jiesen, manager of the research and development centre at Beijing Weiyeyuan Bio-Technology Company.
Posted by Palmoni at 9:20 AM

what do u see for yrcw?