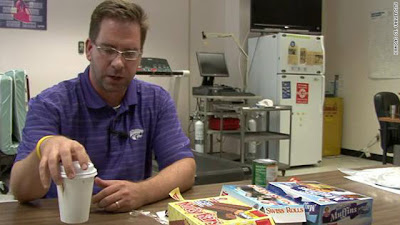 For 10 weeks, Mark Haub, a professor of human nutrition at Kansas State University, ate one of these sugary cakelets every three hours, instead of meals. To add variety in his steady stream of Hostess and Little Debbie snacks, Haub munched on Doritos chips, sugary cereals and Oreos, too.

His premise: That in weight loss, pure calorie counting is what matters most -- not the nutritional value of the food.

The premise held up: On his "convenience store diet," he shed 27 pounds in two months.
For a class project, Haub limited himself to less than 1,800 calories a day. A man of Haub's pre-dieting size usually consumes about 2,600 calories daily. So he followed a basic principle of weight loss: He consumed significantly fewer calories than he burned.

But you might expect other indicators of health would have suffered. Not so.
Haub's "bad" cholesterol, or LDL, dropped 20 percent and his "good" cholesterol, or HDL, increased by 20 percent. He reduced the level of triglycerides, which are a form of fat, by 39 percent.

"That's where the head scratching comes," Haub said. "What does that mean? Does that mean I'm healthier? Or does it mean how we define health from a biology standpoint, that we're missing something?"
Posted by Palmoni at 8:01 AM