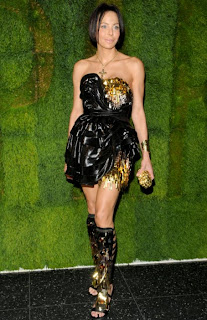 And Goldman Sachs yanks the $120 million they had with him
Bloomberg
Goldman Sachs Group Inc. plans to pull all of its $120 million from Philip Falcone’s main hedge fund after returns lagged behind peers and Falcone disclosed he borrowed $113 million from a smaller fund that had suspended redemptions, said three people briefed on the matter.

Falcone, 48, took the loan from the Harbinger Capital Partners Special Situations Fund in October 2009 to pay personal taxes, Bloomberg Markets Magazine reported in September. At the time, investors were barred from exiting the fund because it had assets tied up in the bankruptcy of Lehman Brothers Holdings Inc. New York-based Harbinger Capital Partners disclosed the loan in the fund’s March 12 financial statements.
-----
So why are Phil's returns down so much? Probably because now he is just making bad trades, while before he made profitable, illegal ones!

Let me remind you again!

Remember how he made $2.5 billion shorting Wachovia stock? Back in late 2008? He did that illegally. Now with investor's money, he just buys junky wireless companies. Maybe he needs a tip from Raj! 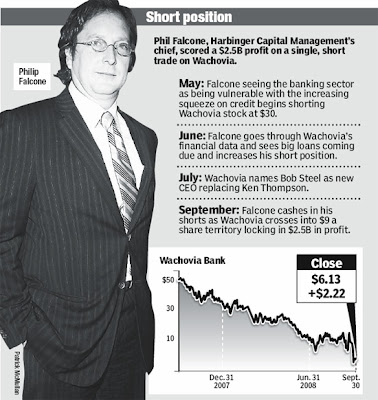 The NY Post  had this to say on October 5, last year:


Philip Falcone, of New York-based Harbinger Capital, rang up the incredible profit by shorting a whopping 117 million Wachoviashares at $30 back in May after his top analyst and investment chief pointed out problems with the Charlotte, N.C.-based bank's mega-billion dollar Option ARM loan portfolio.

The entire short interest in Wachovia, at the end of April in 2008 was 117.4 million shares.

Did Falcone have the entire short?

But wait--he put his short on in May. When the short interest only moved up a couple million shares?

Where was that legal short?

Of 117 million shares? Why didn't it show up on the short interest tables?

Shorts that helped drive Wachovia down?

Oh, that's right. I forgot. He did his shorting through Lehman Brothers. They didn't need a locate!

But we still have Lehman's records.Why doesn't someone check  his locate?
Posted by Palmoni at 7:14 AM