In the beginning of July we heard about the "death cross" that was supposed to take the markets down. That of course, marked the resurrection of the market.

Even now, the pundits, who wailed about the death cross, now acknowledge it was the bottom. And look at the chart, they show after the fact. 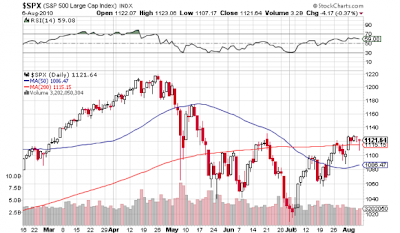 Of course, here, while it happened, and not after the fact, you were told that the death cross marked the bottom of the market. And you even had some work from Hays showing the otherside.

Which one made you money??? Booyah Baby!!

Now the WSJ is pimping an August surprise:

Typically, the stock market does just fine in August, but every now and then, the month's evil twin shows up. Given how nervous investors have become about the risk of deflation or renewed recession, they are beginning to worry about which version of August they will get this year.

August is quirky because so many business, financial and government leaders are on vacation. If there is no unsettling news, stocks tend to drift higher with the A Team out of town. But if something makes the market fall, the drop can be a doozy.

During August 1998, when Russia defaulted on its debt, the Dow Jones Industrial Average fell 15%. It was down 7% the August before, amid an Asian financial crisis. In August 1990, it dropped 10%, as Iraq invaded Kuwait. It fell 1.5% in August 2005, when Hurricane Katrina hit. August also was the month when stocks peaked and headed down before the crash of 1987, although the crash itself waited for October.

Because now the bears say the bulls don't have any bullets left. 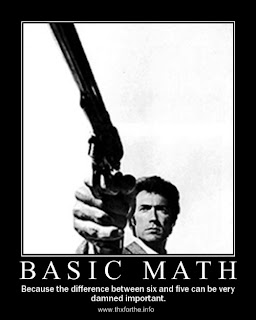 But they were never really good at math!!
Posted by Palmoni at 8:28 PM