You get a trifecta of news for LVS this morniong ! Oh My!!

SINGAPORE—Singapore's nascent casino sector could rival that of the Las Vegas strip in the next two years as Asian gamblers opt for the newer resorts closer to home over the traditional casino center.

Forecasters are already looking to upgrade their expectations for the industry following better-than-expected second-quarter results for Genting Singapore's Resorts World Sentosa, one of two casino-resorts in the city state.

Singapore opened its doors to gamblers earlier this year with two resorts as the government looked to diversify its sources of economic revenue...

The combined daily winnings of both casinos in the second quarter alone suggest an annualized Singapore market of $4.0 billion.

"It's just proof that if you build it they will come and in Singapore they built two products that are worthy of that title," says Andy Nazarechuk, Dean of University of Nevada Las Vegas' Singapore campus.

Sylvester said Wednesday about 50 more shops will open at Marina Bay Sands in September, including Dior and Hermes outlets, bringing the total number of stores to over 150. When fully operational, Marina Bay Sands will have more than 300 stores and restaurants.

To date, the company has signed contracts with future tenants for around 95% of the mall's capacity, said Sylvester, who was once group general manager of the retail assets in Australia and China of GIC Real Estate, the real-estate arm of sovereign-wealth fund Government of Singapore Investment Corp.

NEW YORK — Las Vegas Sands said Wednesday it plans to pay off more than $1 billion in outstanding debt because of its previously announced amendment to a credit facility.

The casino and resort operator led by billionaire Sheldon Adelson says the amendment extends the maturity of nearly 75 percent of its $3.9 billion in term loans and pushes their maturity to 2015 and 2016.

In addition to strengthening its cash position and overall financial profile, the company also says the payment gives it the opportunity to grow its business in emerging gaming markets. 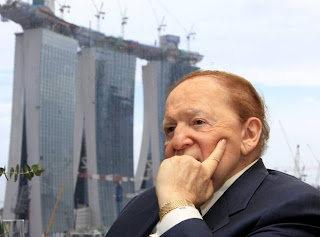 If you listened to the last earnings call from LVS, the inflection in Sheldon's voice told you that Singapore was going to be huge. They're playing Wall Street's game. Underpromise and over deliver to get a higher multiple!!
Posted by Palmoni at 9:19 AM

yeh MGM has been frustrating as heck but I'm just sitting with it as I'm down on it.

Momo guys love LVS--because if you earn X, what the difference if you pay 30X or 40X or 50X--not anything to the momo crowd if the story is open ended or glamorous

I guess that's what's wrong with MGM. Enterprise value is high but this market moves on an earnings multiple