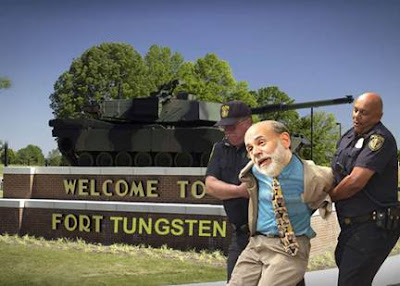 Paul, a longtime critic of the Federal Reserve and U.S. monetary policy, said he believes it's "a possibility" that there might not actually be any gold in the vaults of Fort Knox or the New York Federal Reserve bank.

The libertarian lawmaker told Kitco News, a website tracking news about precious metals, that an audit was necessary to determine how much the U.S. maintains in gold reserves in case the government were to use gold to back the dollar.

“If there was no question about the gold being there, you think they would be anxious to prove gold is there,” he said.

“Our Federal Reserve admits to nothing, and they should prove all the gold is there. There is a reason to be suspicious and even if you are not suspicious why wouldn’t you have an audit?

“I think it is a possibility," Paul said when asked if there was truth to rumors that there was actually no gold at Ft. Knox or the New York Fed.
Posted by Palmoni at 3:12 PM

what a rough day...bulls can't win

Ron Paul is a looney. Who cares if there is enough gold.

Yeah, Ron Paul is an idiot. Keynesian economics is the way to go. Get a clue anon, and realize that the day to day fluctuations of the stock market are meaningless. F@@k the Fed and the stock market pump monkeys! What matters is the long term health of the US economy. The bears are the true patriots because they want a solution, no matter how painful it is. To quote Patrick Henry:
“It is natural for man to indulge in the illusions of hope. We are apt to shut our eyes against a painful truth, and listen to the song of that siren till she transforms us into beasts... For my part, whatever anguish of spirit it may cost, I am willing to know the whole truth, to know the worst, and to provide for it.”

Bears really want the truth? The truth that being a bear sucks?