BO plays hoops with NBA stars and bans the press 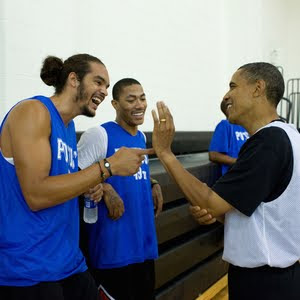 WASHINGTON — President Obama pulled together an informal dream team of current and former basketball superstars Sunday. But only a few people got to see it.

The game was played for a group of "wounded warriors" — troops injured in action — and participants in the White House's mentoring program. It took place at a gym inside Washington's Fort McNair, a short drive from the White House. The president was inside the gym for about two hours.

The reporters assigned to keep tabs on the president were shut out of the gym, forced to wait in vans outside. Asked why media coverage was blocked, White House Press Secretary Robert Gibbs said Obama "just wanted to play."
Posted by Palmoni at 6:28 PM