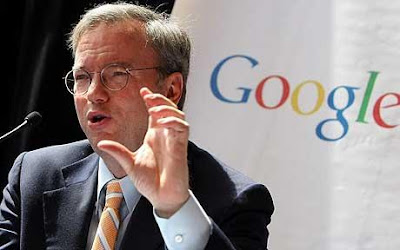 Eric Schmidt suggested that young people should be entitled to change their identity to escape their misspent youth, which is now recorded in excruciating detail on social networking sites such as Facebook.

"I don't believe society understands what happens when everything is available, knowable and recorded by everyone all the time," Mr Schmidt told the Wall Street Journal.

In an interview Mr Schmidt said he believed that every young person will one day be allowed to change their name to distance themselves from embarrasssing photographs and material stored on their friends' social media sites.

The 55-year-old also predicted that in the future, Google will know so much about its users that the search engine will be able to help them plan their lives.

Using profiles of it customers and tracking their locations through their smart phones, it will be able to provide live updates on their surroundings and inform them of tasks they need to do.
Posted by Palmoni at 10:03 AM