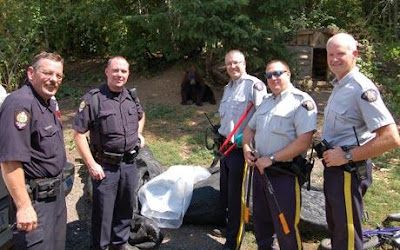 The fields of about 2,300 plants were found near Christina Lake, just a few miles from the border.

Royal Canadian Mounted Police Cpl. Dan Moskaluk says that when police arrived in the area two weeks ago, they discovered the bears and cautiously went about making the seizure.

However he said the bears were docile and obviously were used to humans. They could be put down if they are too habituated to people
Posted by Palmoni at 3:13 PM

Wait, THAT was the correction! This time I really really mean it. NOW it's time to buy!!

o yea, we are in the silly season.. mu-ha-ha-haaaaaaa
But you buy Palmoni cause you are not silly you are smart. You are smarter then Roubini right? They are bears with tails haaaaa-ha-ha
Good investment blog you got going here

Lol Palmoni, you have some crazy haters here...people that missed the entire rally from 6400 and are now pissed and bearish.

No matter, a fool and his money are soon parted.

Anon, you're right, 12,200 by the end of the year. But being too early is the same as being wrong. We've had a hell of a pause so far haven't we? Are you sure we're done with it? A fool and his money are soon parted? But you have a crystal ball right?

Palmoni, do you have an email address?

If you dont want it public , can you email me at beanieville@gmail.com